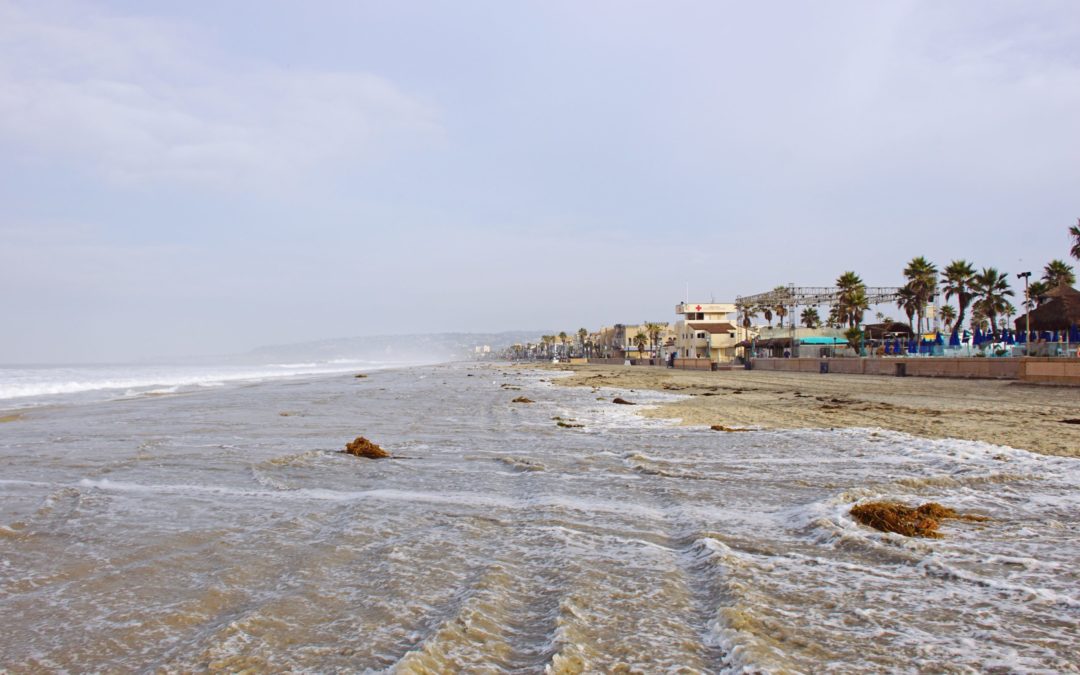 Let’s start with a basic explanation of tides and why they happen.

Tides are the rise and fall of sea levels caused by the combined effects of the gravitational forces exerted by the Moon and the Sun, and the rotation of the Earth.

Gravity is one major force that creates tides. In 1687, Sir Isaac Newton explained that ocean tides result from the gravitational attraction of the sun and moon on the oceans of the earth.

San Diego has low tides and high tides in December, and we are going to share that adventure!

Remember the cover photograph for this article?  There is a beige building with a red cross (the life guard building).  If you look closely in this photograph, you can see that building about one third distance from the right margin.

The kelp is a marker.

The photograph on the left was taken after the high tide.  You can tell because the kelp is left behind when the water recedes, so you know that, before all the footprints and tire tracks, that part of the beach was under water.

These photographs were taken about ten hours apart, from as close to the same spot as we could remember.  Most people abandon the beach at high tide, but walk quietly and look for shells (and whatever) at low tide.

As different as day and night.

In San Diego, high tide and low tide are separated by about five hours, and we have two of each every day.  However, the highest and lowest tides of the year do not always happen on the same day.

Mission Bay has its highs and lows.

Mission Bay, near the Bahia Resort Hotel, provides a good visual of the different tides.  It’s interesting because we always wonder, “What’s on the bottom of the ocean where I’m swimming?”  Then we see that it’s just boring sand.  Man, Aquaman really had me fooled for a while.  😀 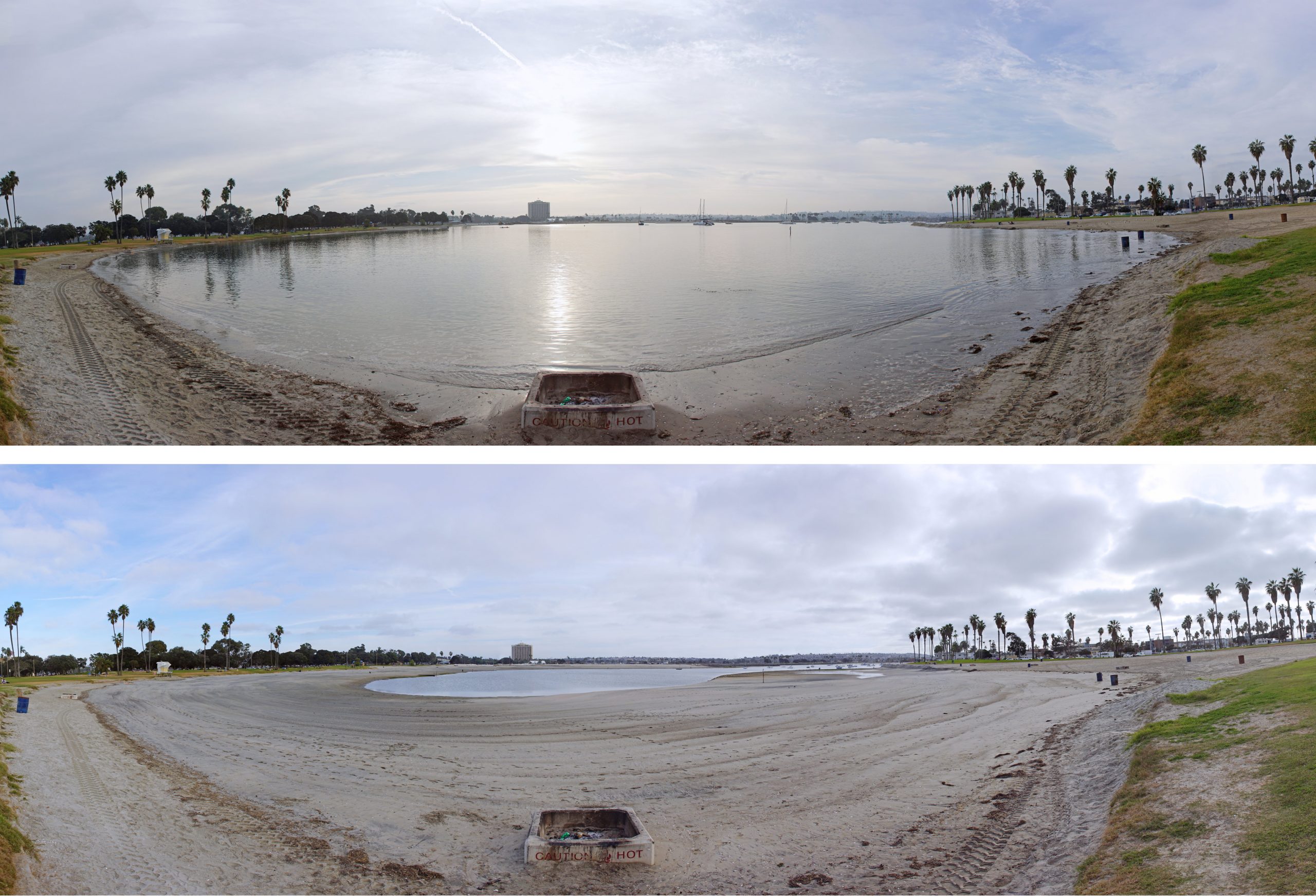 This fire pit, currently housing aluminum cans, is a convenient marker.  In San Diego, high tide and low tide might differ only by ten feet, but that’s vertical distance.  The horizontal distance and the amount of sand exposed can be significant.

Crystal Pier, seen from the beach.

The north side of Crystal Pier.

Yes, there are some rather ugly hotels along the coast in Mission Beach and Pacific Beach, but only a few are Miami-grade ugly.  At any rate, the high tide tends to be a bit rougher than the low tide, but, since this is San Diego, nothing is *too* rough, so surfers don their wet suits and enjoy the December surf.

The sought side of Crystal Pier shows the difference in wave size and power during low tide and high tide.

As different as day and night.

The tide charts show the time and height of each tide, so, to enjoy both, you have to be willing to hit the beach early in the day with your cup of warm coffee and then return in the evening to watch the sun go down.

Okay, don’t be so gullible.

There is a plethora of shore birds during low tide and high tide.  During low tide, much more beach than normal is exposed, as are the creatures that live in the sand.  During high tide, the waves churn the sand and, when each wave receded, myriad creatures are temporarily exposed.  Both situations are advantageous for hungry gulls and shore birds.

Many people build castle in the sand.  Those castles can be rugged Middle Ages-style fortresses or high-end living quarters for the Prince and Princess. 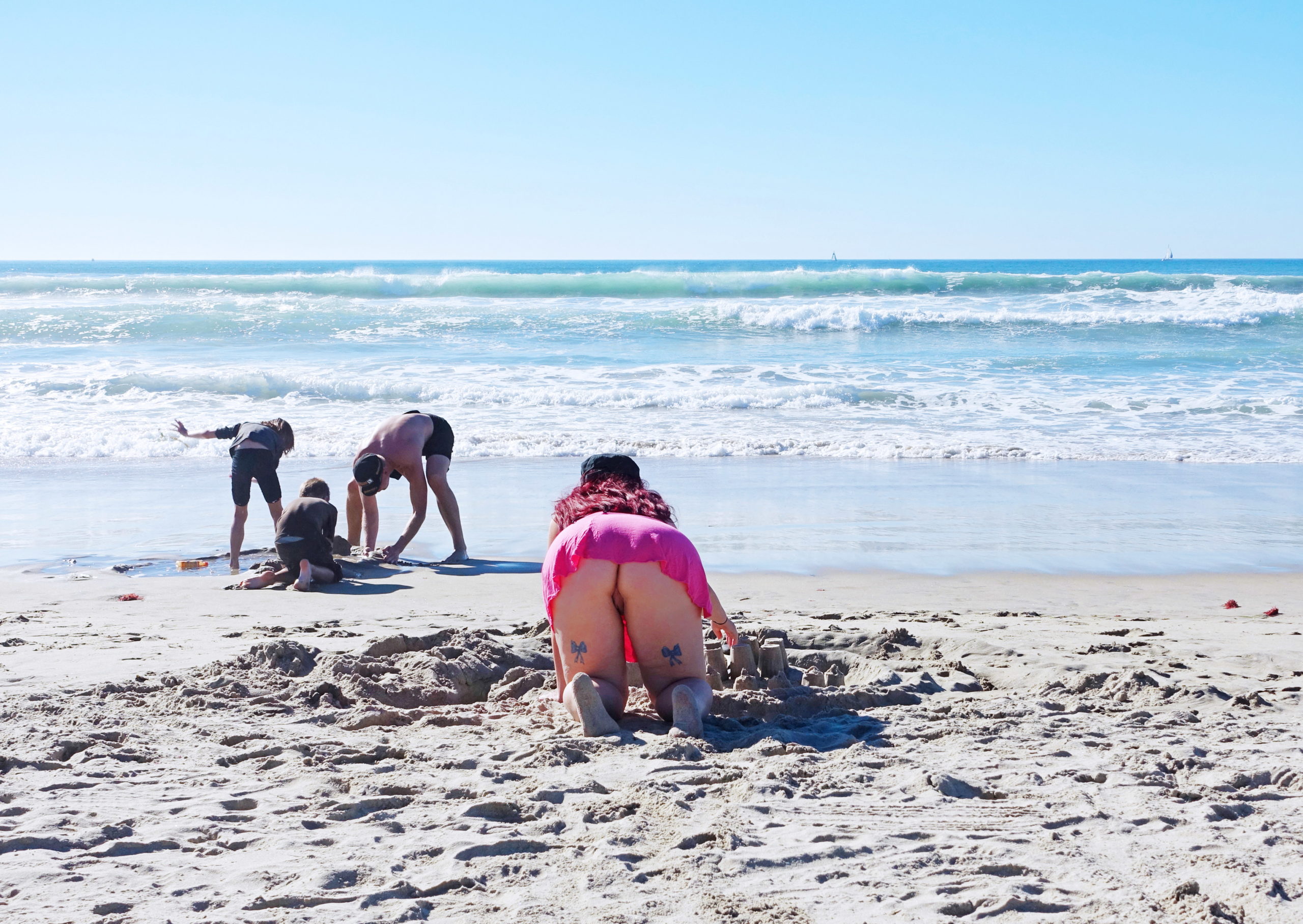 There is an art to building sand castles.

Building a sand castle may seem simple, but, done correctly, it is full of wonder and delight, something that will keep you occupied for many hours. 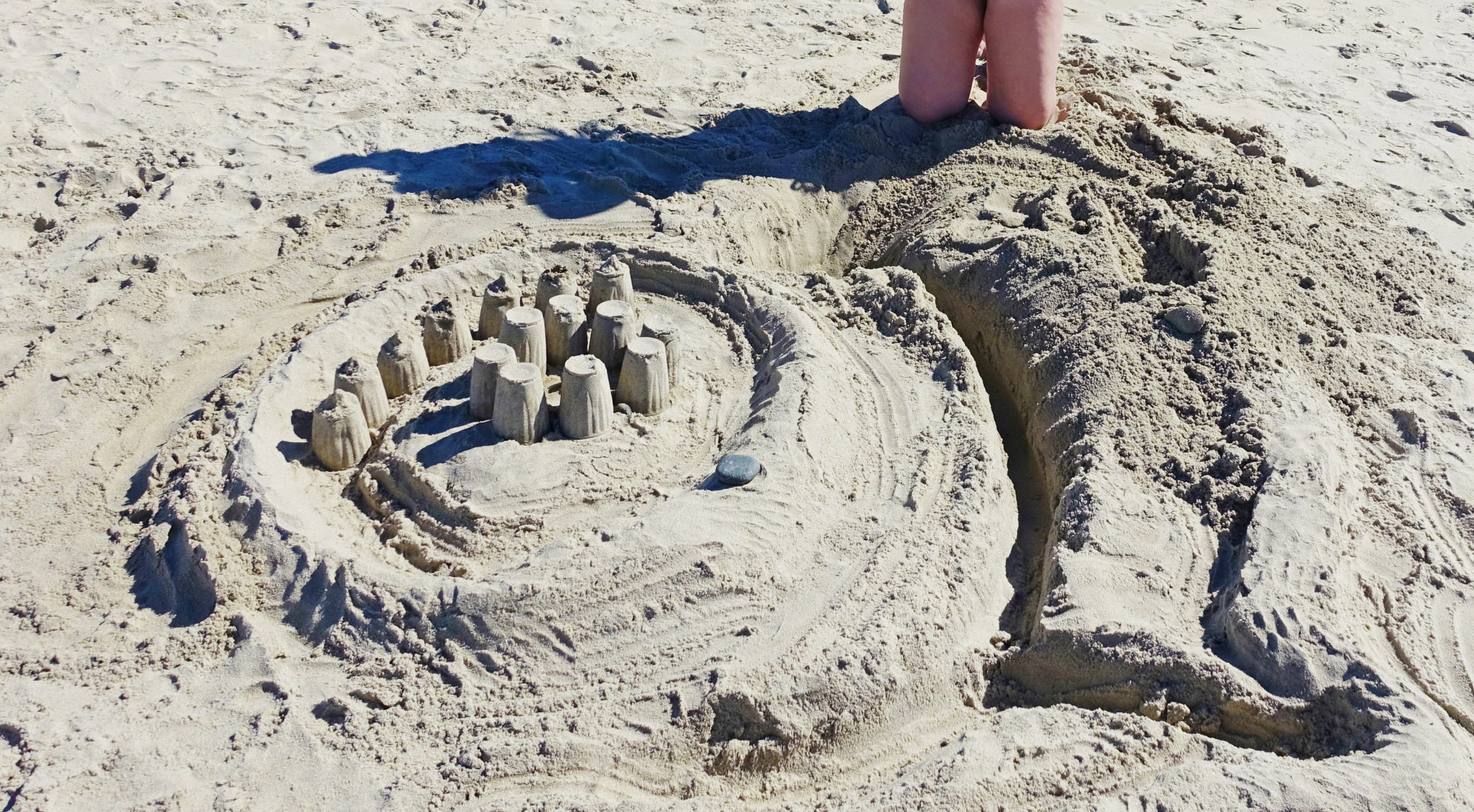 It may look like a low-rent castle, but it is “home” to its tiny inhabitants.

We prefer simple castles that appeal to the common folk.  🙄   But here’s the thing: the most fun about building castles is constructing an advanced moat system to deal with the inevitable flooding from climate change, meteor strike, tsunami, or whatever natural disaster you’ve conjured up. 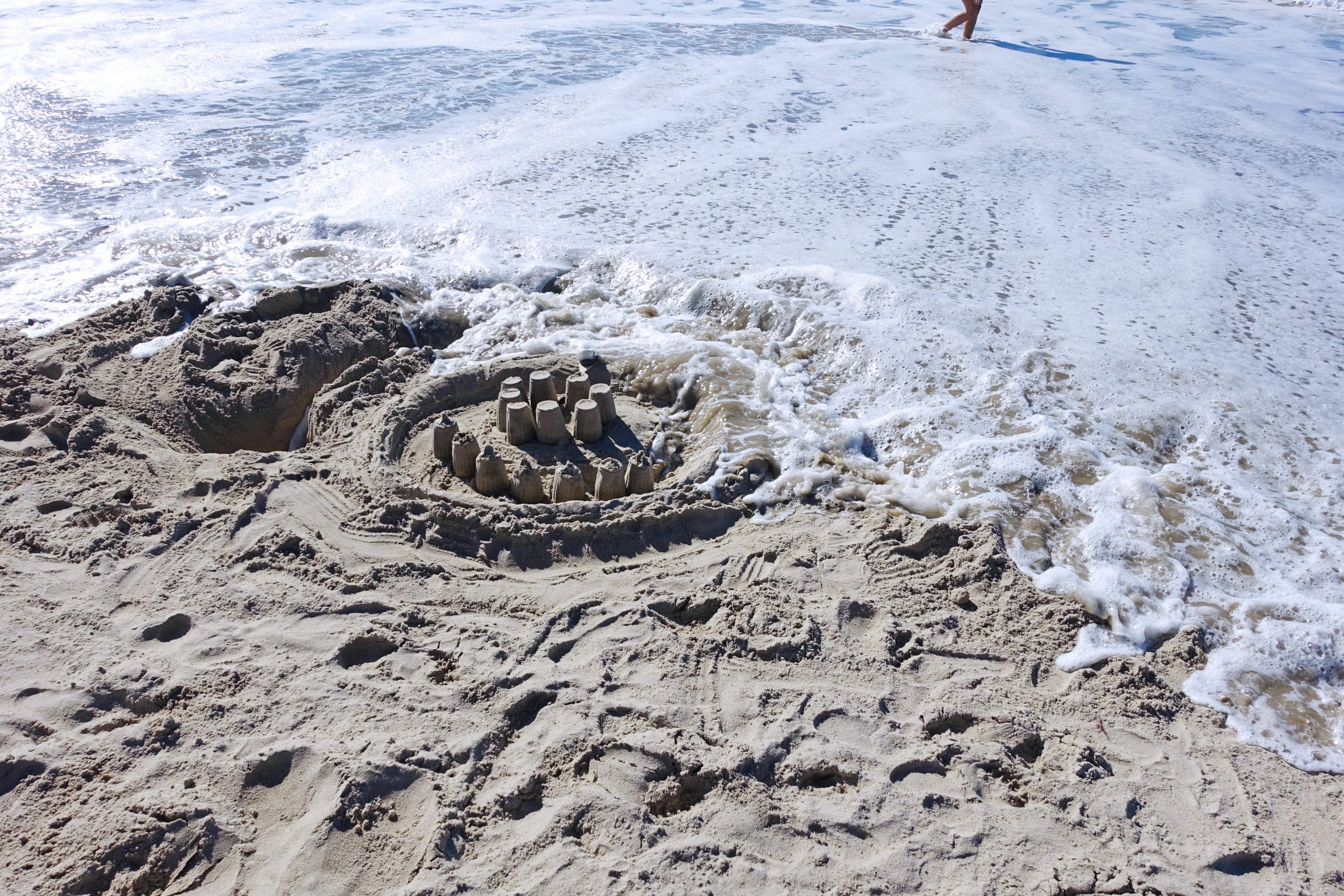 All Hands! Man the life rafts!!

And you can’t know where to build your mighty castle unless you know about low tides and high tides.  😎

awa Travels Tip: Many people vacation near the ocean and rarely think about the twice-daily tides.  Give yourself the simple pleasure of watching gravity play with the water.