A Ballet, a Concert, and an Opera 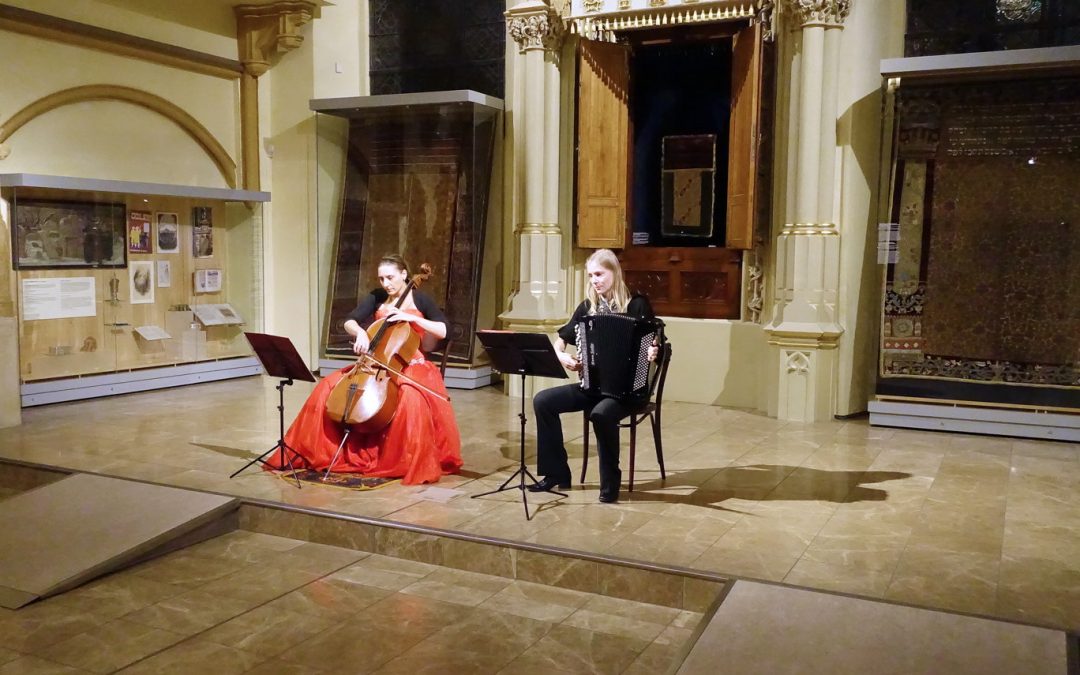 A Ballet, a Concert, and an Opera: what better way to enjoy European culture at its finest.

The Bayerisches Staatsballett is performing Giselle in the Nationaltheater in München, and we are going to see it. 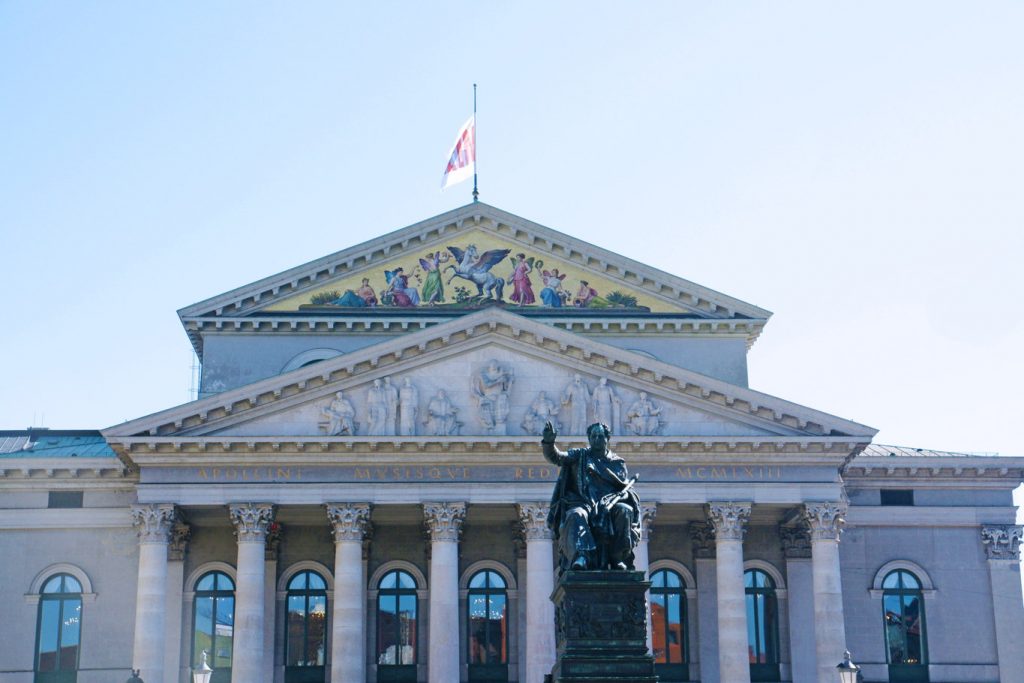 Der Bayerische Staatsoper on Max-Joseph-Platz in München, German.  We are taking a photograph during the day so we can capture the grand columns and portico reminiscent of Greek temples. The statue in the foreground is Max-Joseph Denkmal, a memorial for King Maximilian I Joseph of Bavaria. 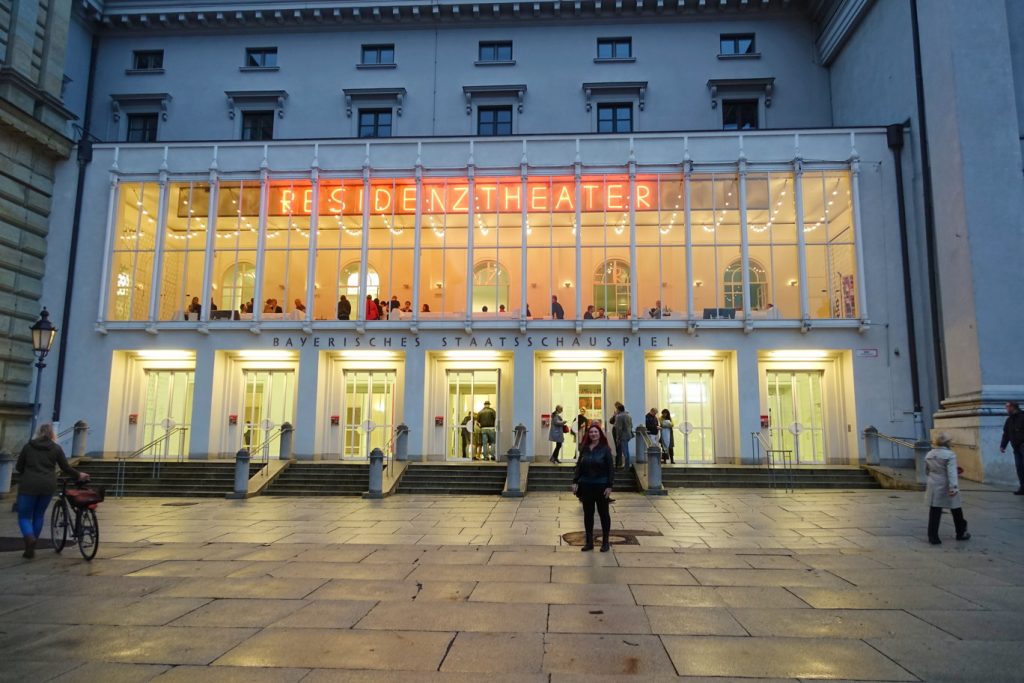 This is der Bayerische Staatsschauspiel; Giselle will be performed in der Bayerisch Staatsoper, just to the right.  We are taking a photograph here because the lighting is better.  😎 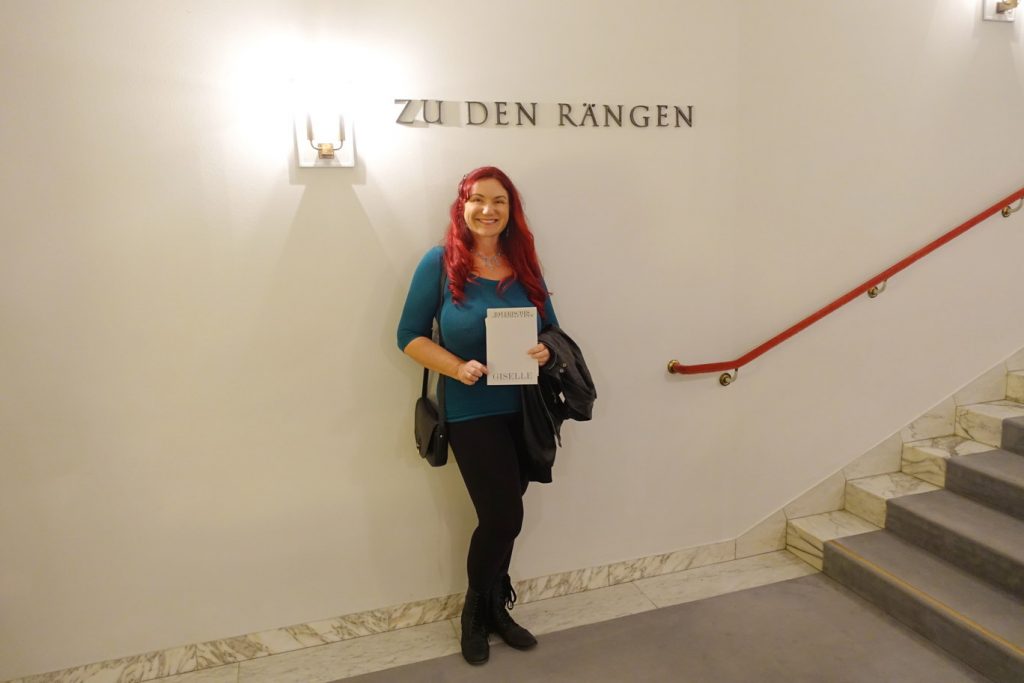 A stately hallway leading up to the ranks.  We aren’t sure what the ranks are, but we’re going up. 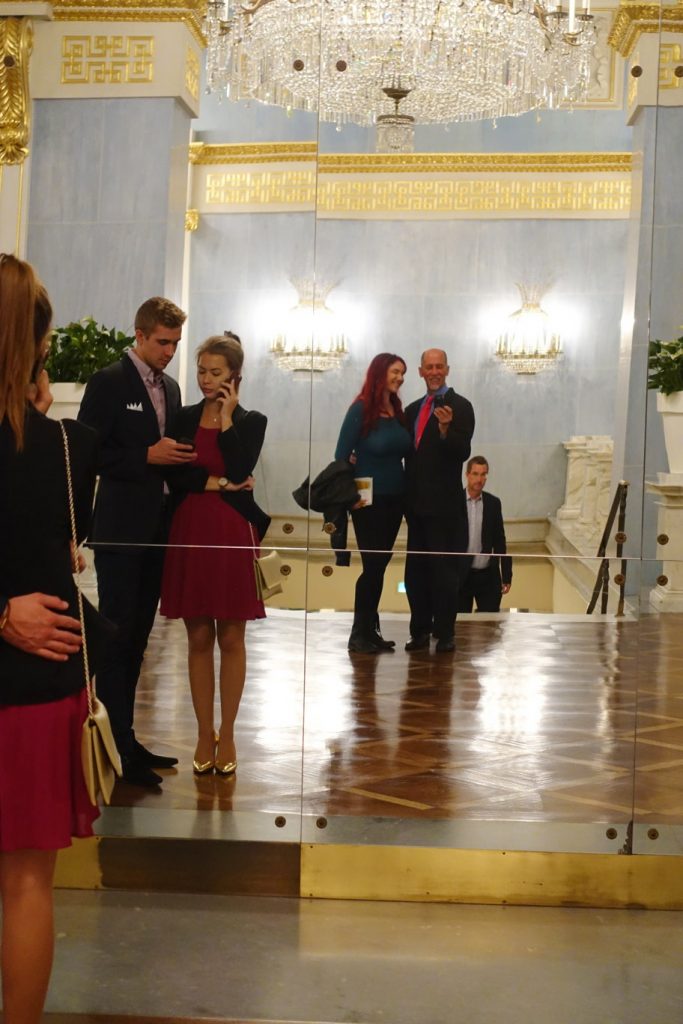 Everything is gilded, even that girl’s shoes!

This is just the foyer.  The inside is sure to be magnificent. 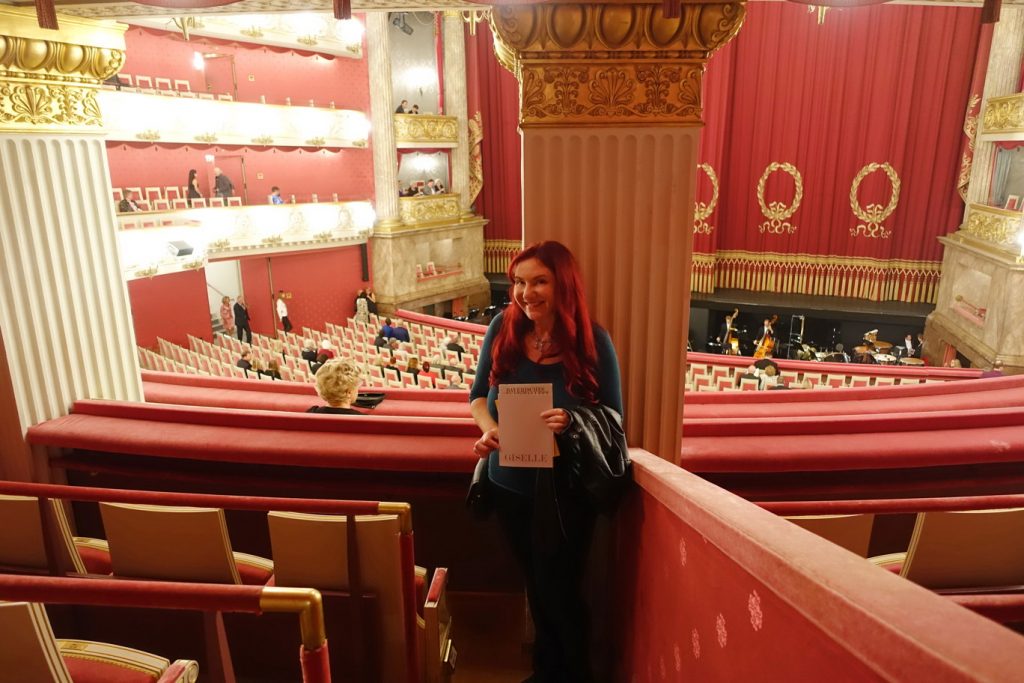 The view from the balcony.

We are not disappointed.  The theatre is pink, and most of the pink is fuzzy.  An usher asks us to refrain from taking photographs — well, us and about 50 other people. Truly, this theatre is too amazing to NOT take photographs. 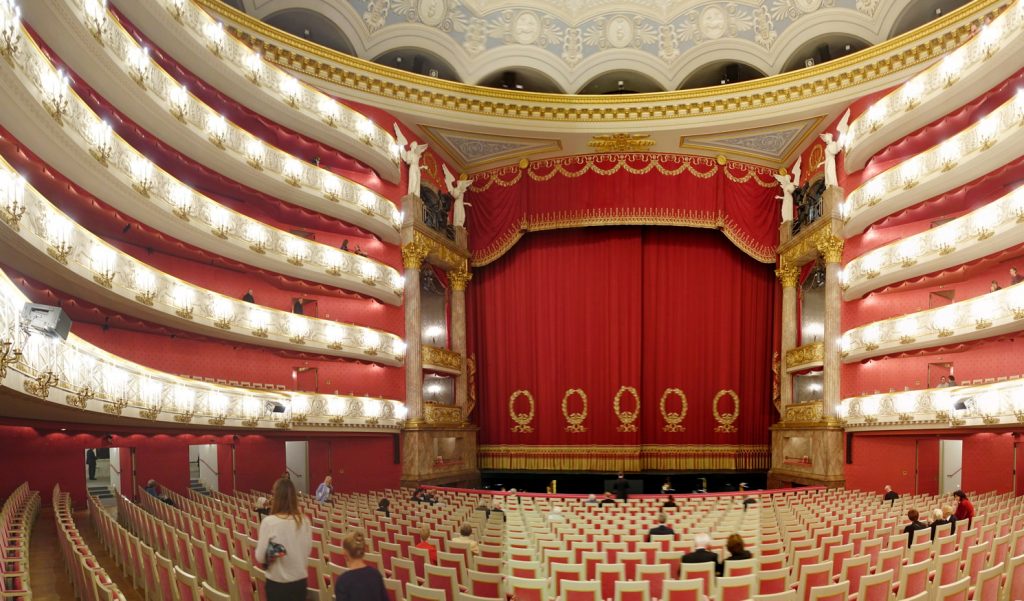 A panorama of the theatre. Pink, and more pink.

We are thinking, if the ballet is anything like the theatre, it will be magnificent. 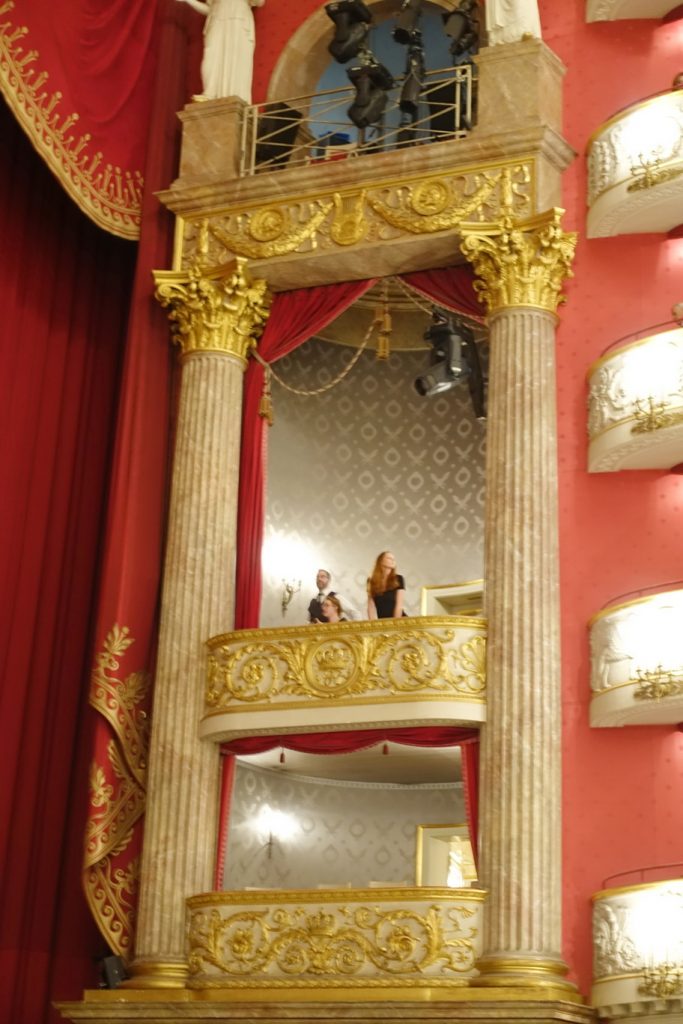 Patrons in the state box.

The guests arrive.  Shhhhh, the performance is about to begin!

Giselle, a peasant girl, is in love with Albrecht, and he with her. He romances her during the harvest festivities. A party of noblemen seeking refreshment following the rigors of the hunt arrive in the village, and Albrecht mysteriously hurries away. Bathilde, the daughter of the Duke of Courtland, is charmed with Giselle’s sweet and demure nature, and offers her a necklace as a gift before the group of nobles depart.

Hilarion, a local gamekeeper, is also in love with Giselle, and discovers that Albrecht is a nobleman who is promised to another. Using Albrecht’s hunting horn, Hilarion calls back the party of noblemen, and it is indeed Bathilde to whom Albrecht is promised.

Giselle, furious with grief, begins dancing (of course; it’s a ballet, right?) erratically, causing her weak heart to give out, and she dies.  The curtain closes.

Act II begins, and the Wilis — ghostly spirits of maidens betrayed by their lovers — appear. Led by their merciless queen Myrtha, they haunt the forest at night to seek revenge on any man they encounter, forcing their victims to dance until they die of exhaustion.

However, the power of Giselle’s love counters the Wilis’ magic and spares his life. The other spirits return to their graves at daybreak, but Giselle has broken through the chains of hatred and vengeance that control the Wilis, and is thus released from their powers. After bidding a tender farewell to Albrecht, Giselle returns to her grave to rest in peace.

The curtain closes, then rises so we can show our appreciation to the performers. 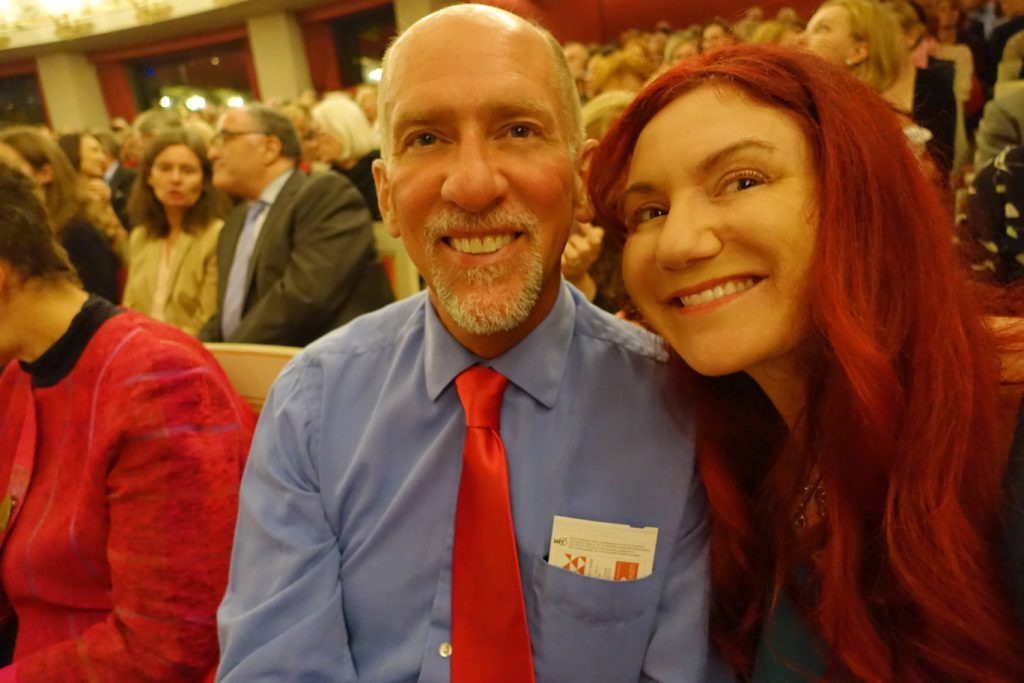 Yours truly, enjoying the show at intermission.

We leave the theatre and walk slowly back to our apartment, filled with happiness that we are able to experience such a wonderful event.

Obrazy z cest, Pictures from Journeys, is being performed at the Maisel Synagogue in Prague, at it is next on our list of cultural events. 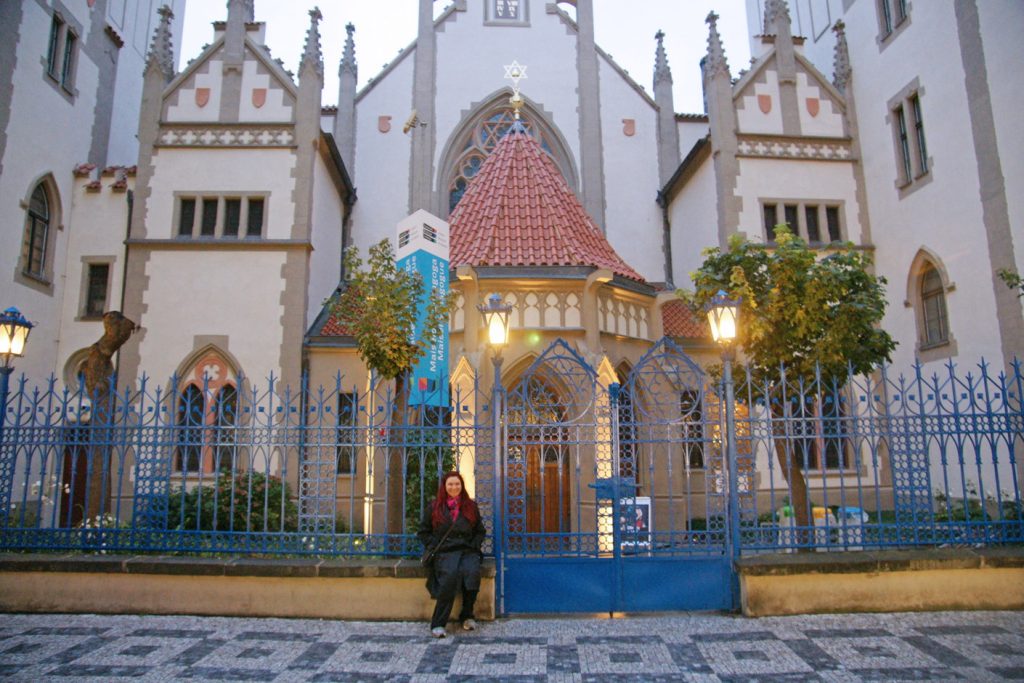 The Maisel Synagogue in Prague.

The Maisel Synagogue is an unpretentious building located in the Jewish quarter of Prague. Originally built in the late 1500s, it was rebuilt a number of times, most extensively after a fire in the late 1600s.  We are taking this photograph at night which is why the street lamps are lit. 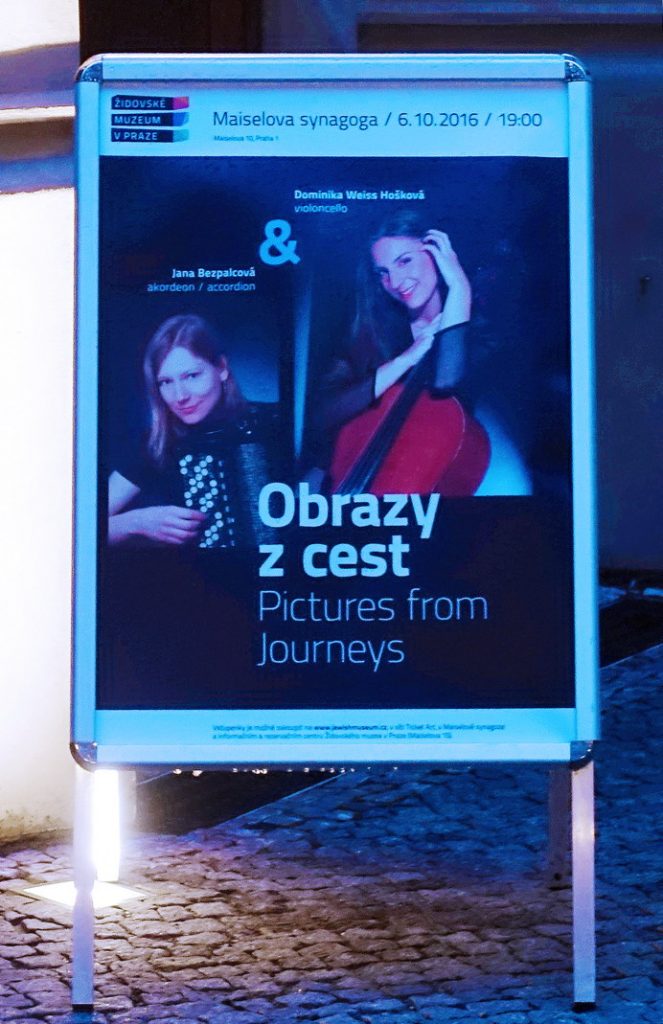 We are not sure what to expect, but the credentials of the musicians indicate it will be a grand performance. 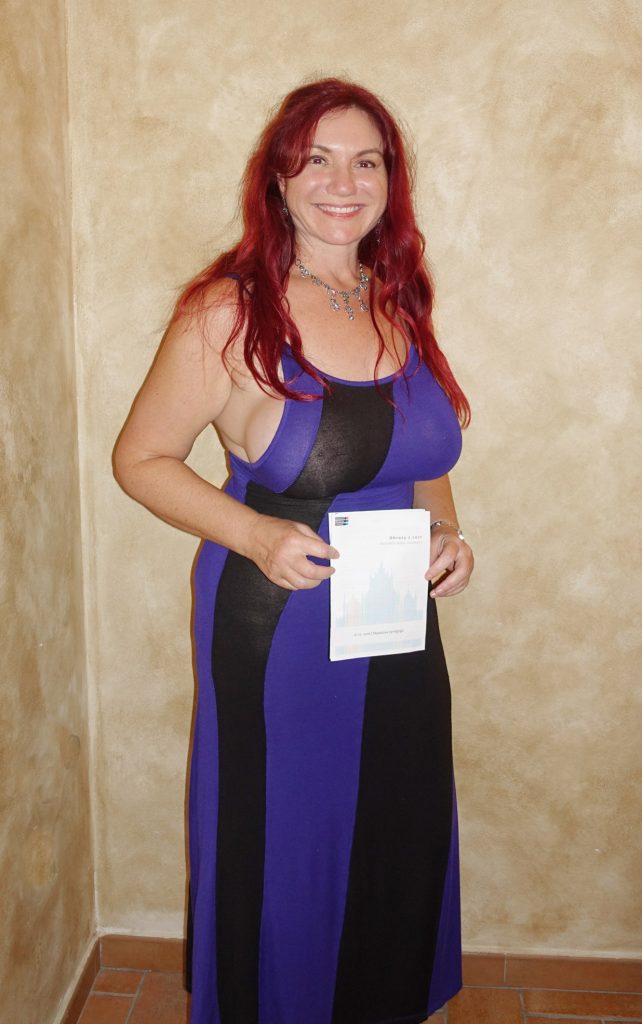 Ready to see the concert.

We aren’t sure if photographs are allowed in the synagogue, but we take a quick one anyway.  🙄 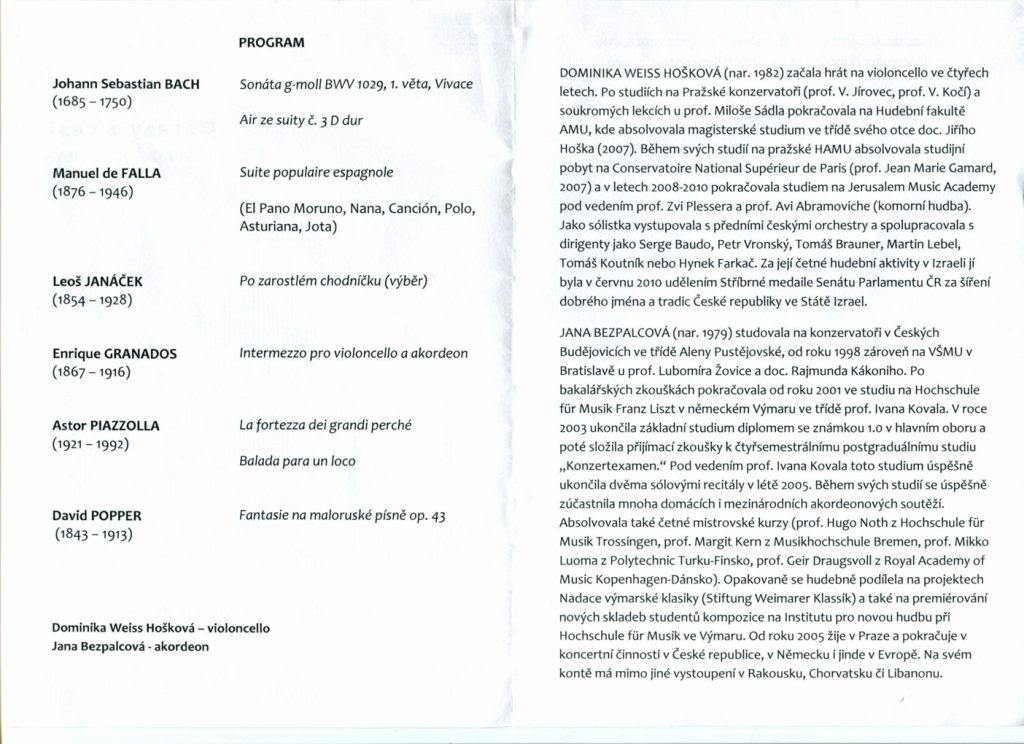 We have a confession: we can’t read this program. 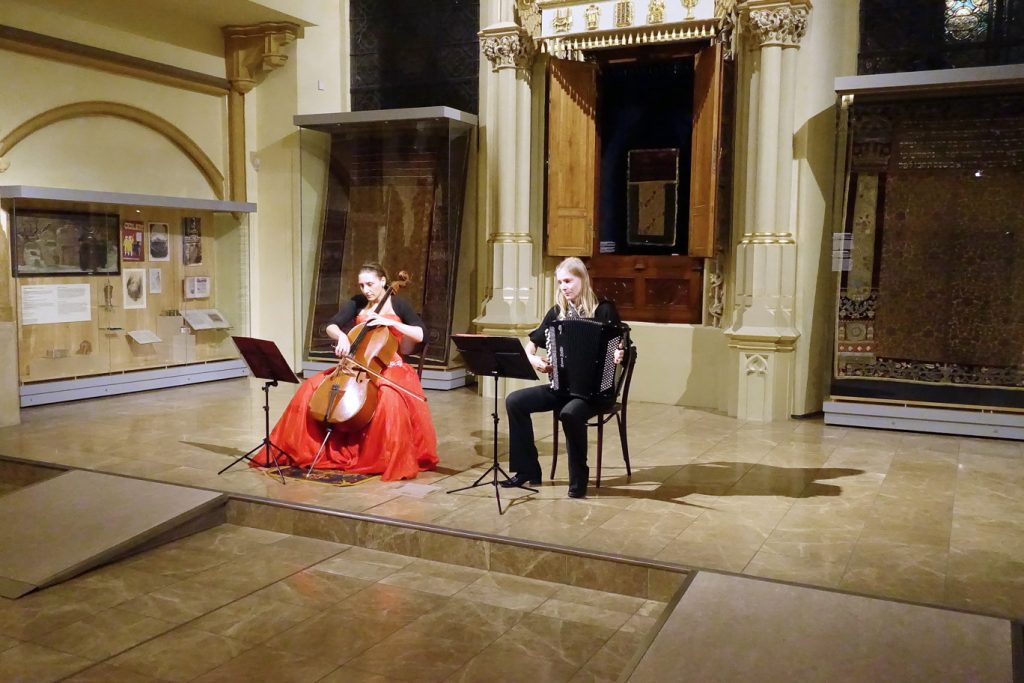 The concert begins, and it’s incredible. We don’t have the vocabulary to describe the quality and emotional content of the music. Dominika Weiss Hošková plays one complex piece without sheet music. Amazing.

It is a magical performance and a magical evening.

Our next adventure takes us to Narodni Divadlo, the National Theatre in Prague, where we will see the opera La Traviata, the story of the woman who strayed. 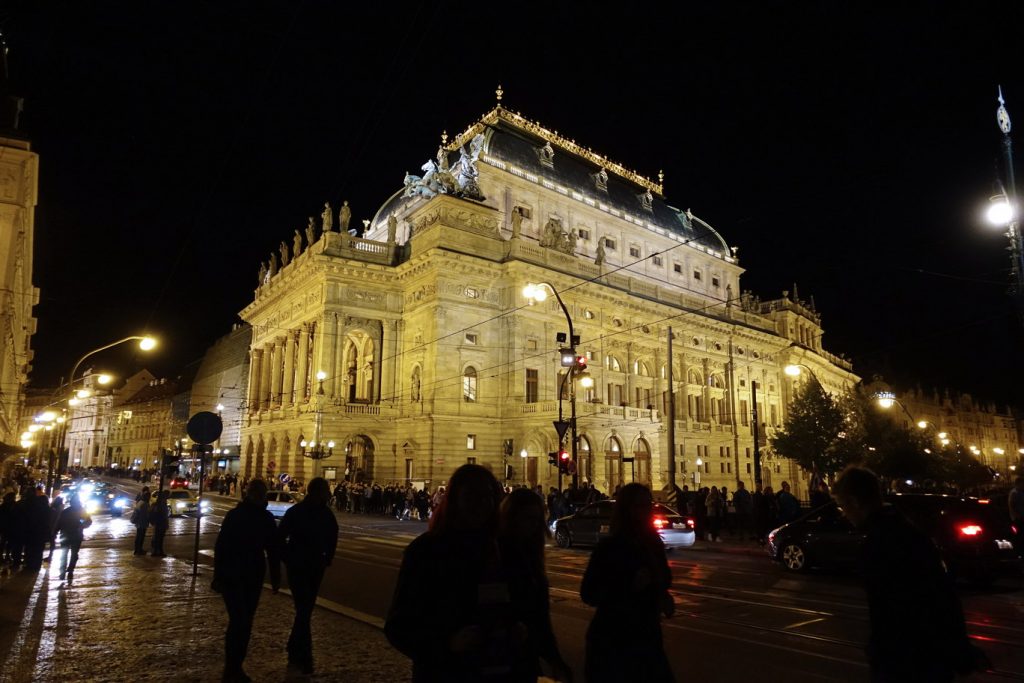 Narodni Divadlo, the National Theatre in Prague, on the shores of the Vltava river.

The National Theatre building is what you’d expect of the flagship of the Czech National Theatre institution. Like many European structures, the front is designed to honor the influence of Greek culture. 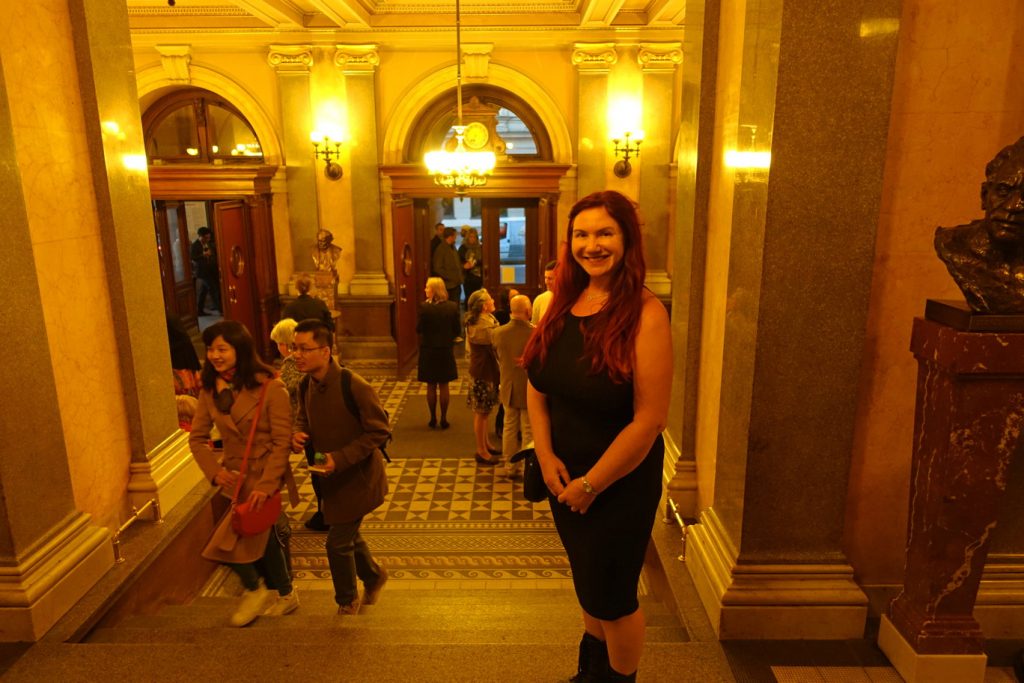 The foyer of the National Theatre.

The lighting gives a yellow cast to everything.  We check (no pun intended) our coats and explore the theatre. 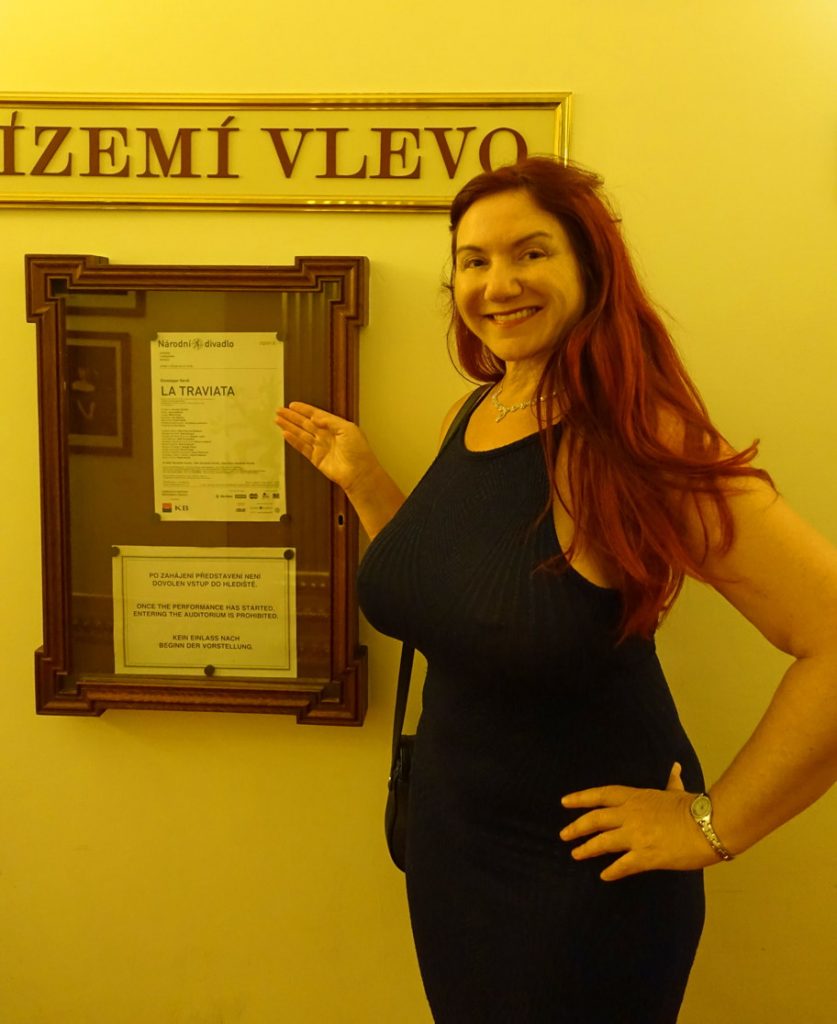 This is the performance we are seeing.

The program is elegantly posted. 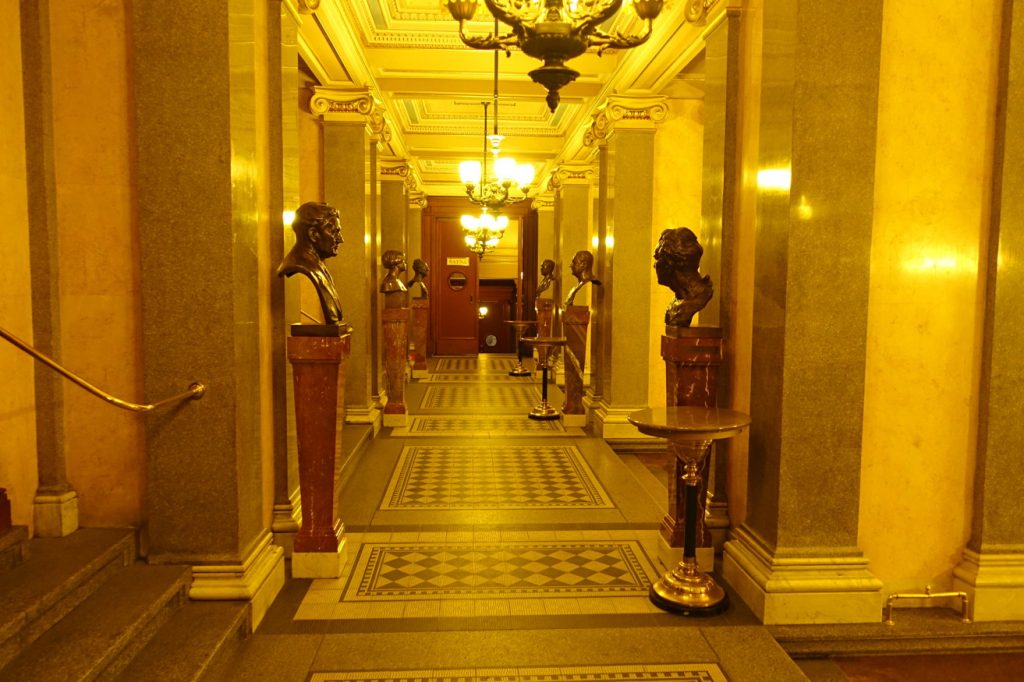 The Hallway of Heads.

We’re not sure what this hallway is really called, but “Hallway of Heads” seems to work. 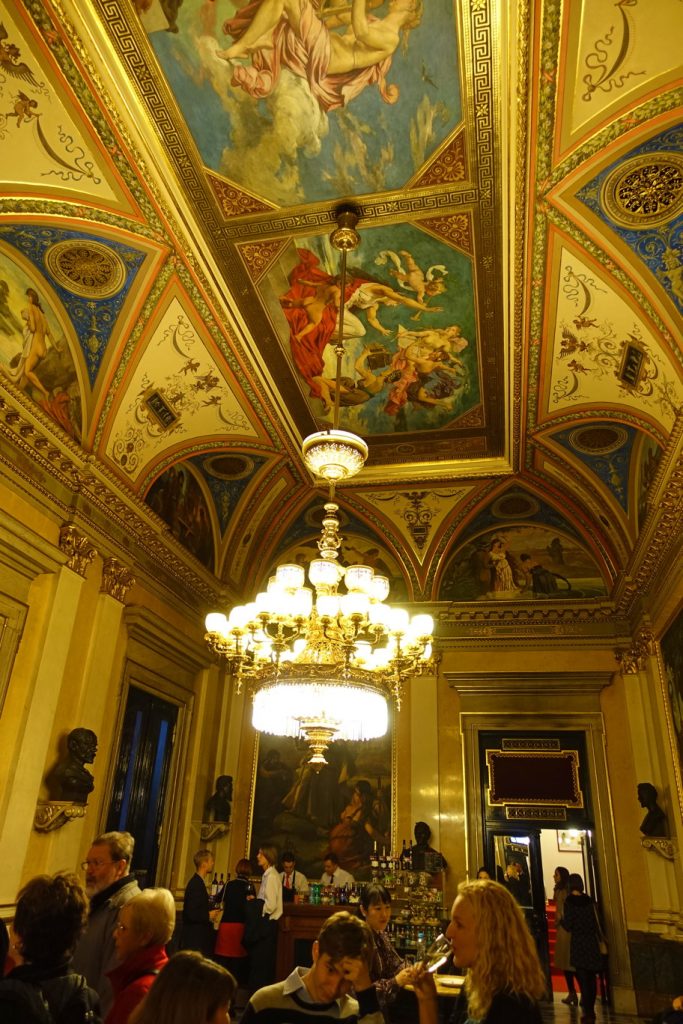 Even the ceilings are magnificent.

The refreshment center is as beautifully appointed as you’d expect in the National Theatre. 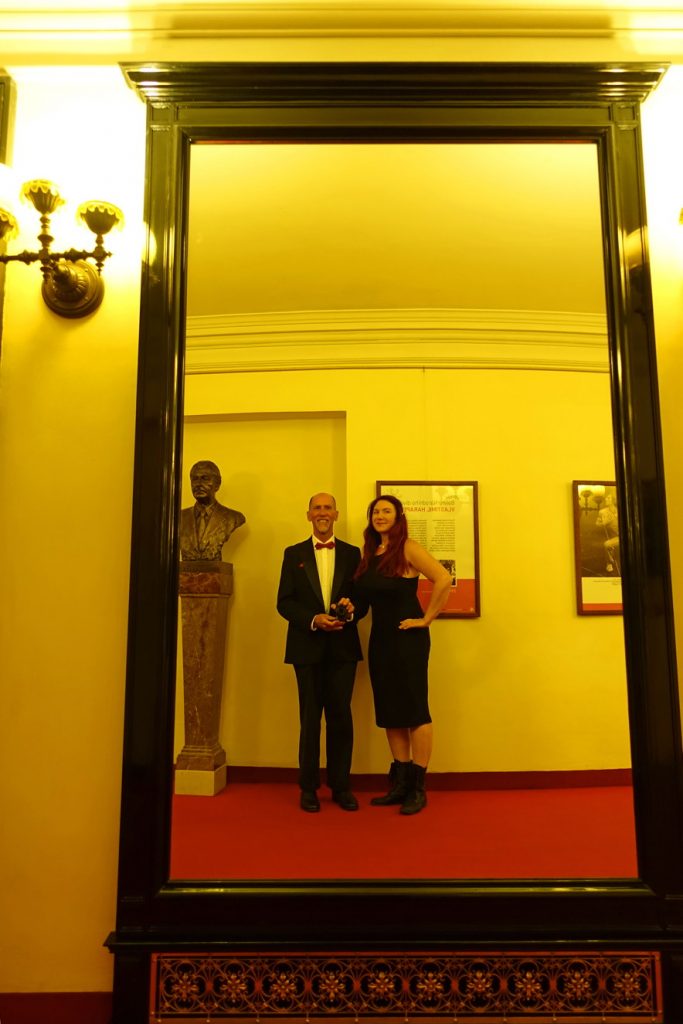 A selfie of yours truly.

Magic mirror on the wall, who’s the fairest of them all? 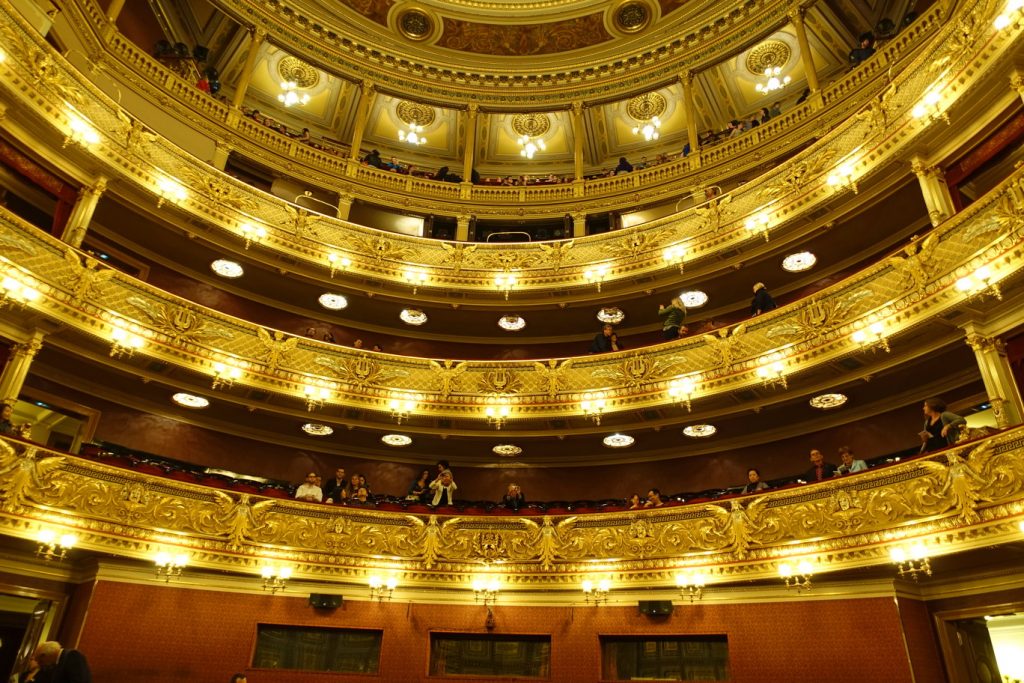 Inside the National Theatre in Prague.

Inside the theatre, everything is gilded — which explains the yellow lighting. 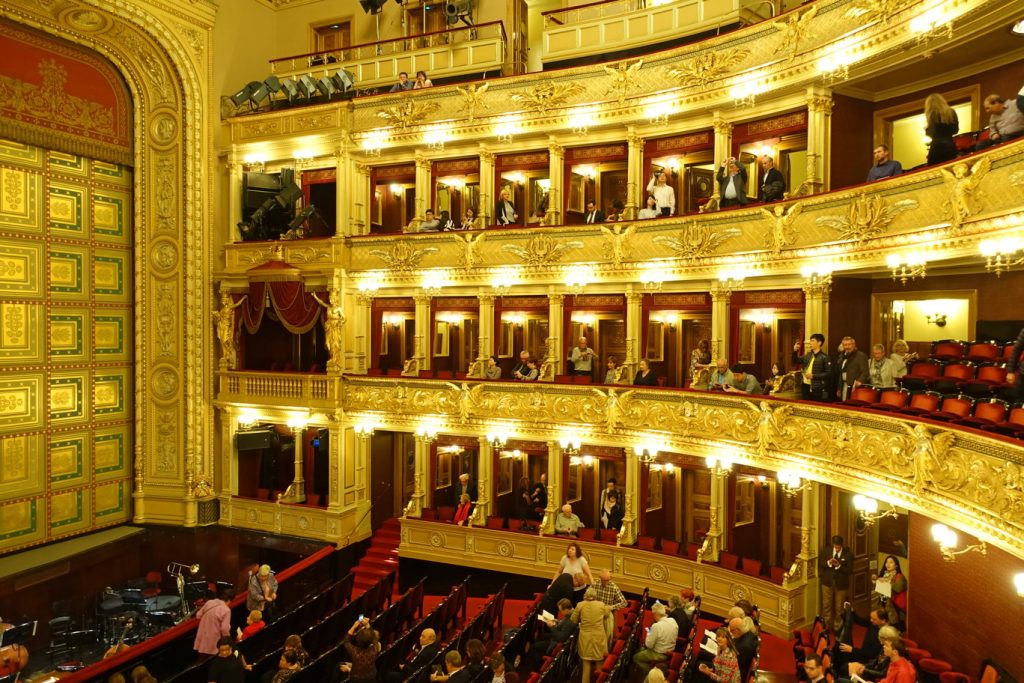 The opera patrons are slowly seating themselves. 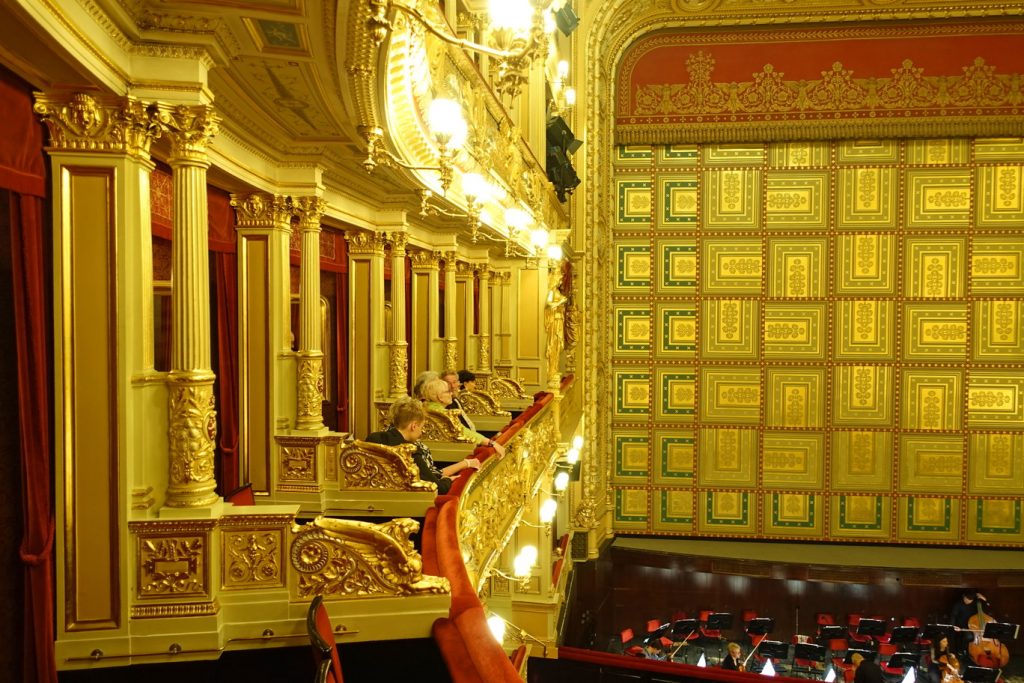 The theatre is fit for royalty. 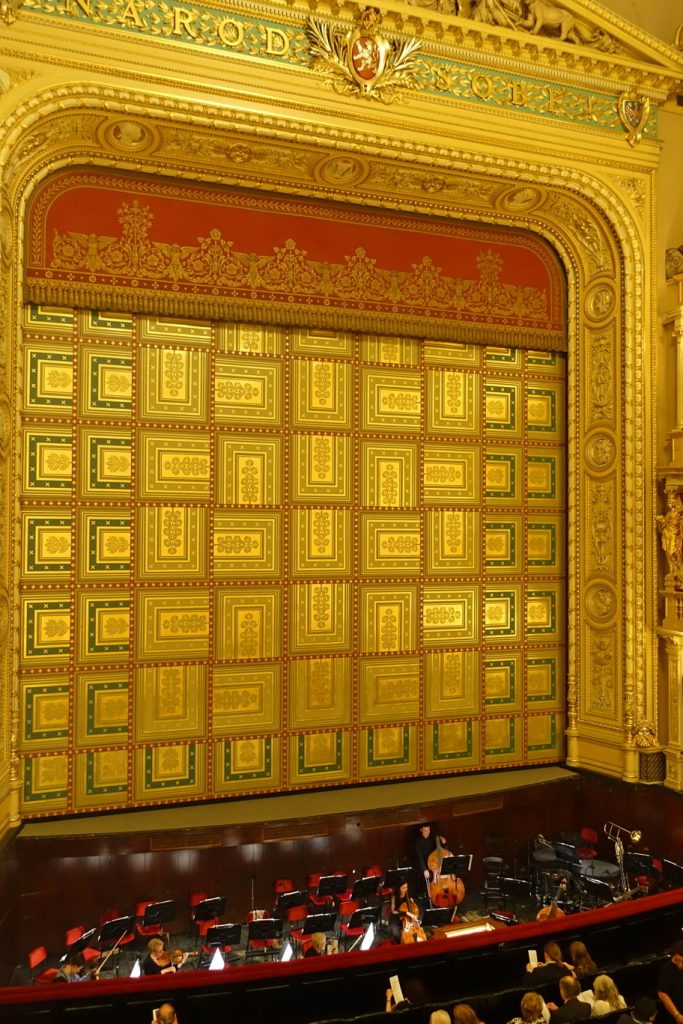 The main stage and the orchestra pit.

The orchestra members take their seats…and the performance begins!

Act 1
In Paris in the mid-1800s, there is a great party at the salon in the house of Violetta, the most popular high-class prostitute. A young man, Alfredo, attends and sings the song of “Brindisi.” He has adored Violetta from long before, and he uses this opportunity to express his feelings for her after singing. Violetta had believed that she had no interest in true love because of her occupation, but she is confused by Alfredo’s pure mind.

Act 2
Violetta goes out of the fashionable society, and she peacefully lives just with Alfredo in the suburbs of Paris. One day, when Alfredo is away, Violetta unexpectedly receives a visit from Alfredo’s father. He puts pressure on her to break up with Alfredo because of her past. Violetta is filled with sorrow, but she makes up her mind to break up with her boyfriend. She leaves their home without telling him the truth. Alfredo who knows nothing, gets angry at her breaking his trust in her. That same night, Violetta goes back to the society in Paris, and attends a party. Alfredo pursues her and makes accusations about her in front of all the guests.

Act 3
After a few months, Violetta lies down on her bed alone. In fact, she has been ill with a serious disease for some time and knew about it even while living with Alfredo. Death is fast approaching. At last, Alfredo rushes to her bedside; he was given a true account by his father, asks for her forgiveness. They swear to live together, but time is up, and Violetta breathes her last breath as she remembers the time she spent with Alfredo. 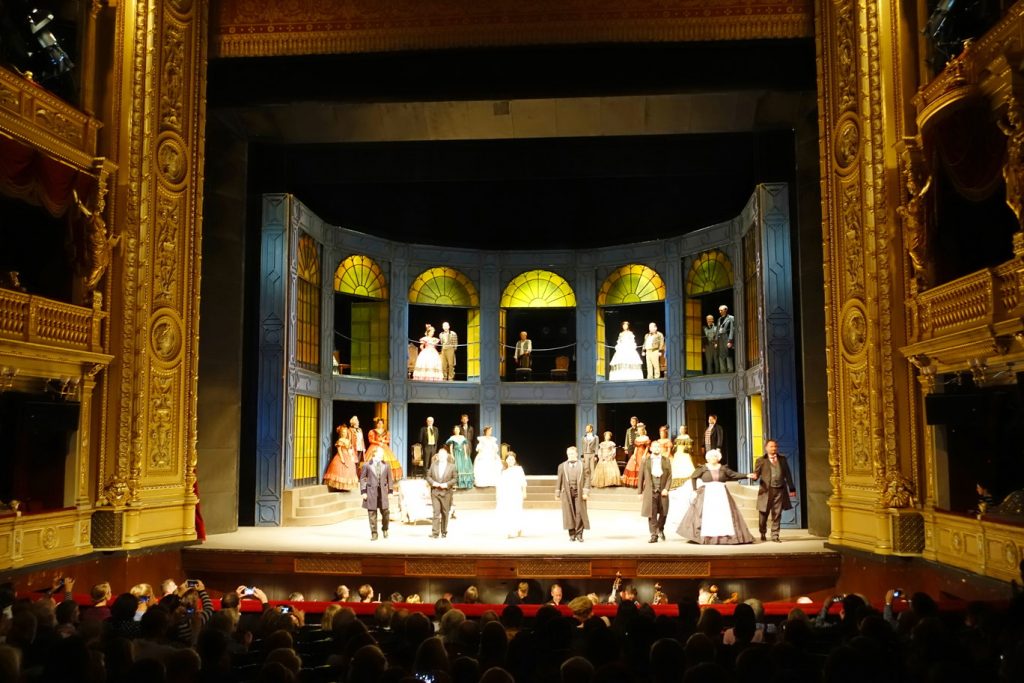 The performance is magnificent. As with any great work of art, there are no words to describe the feelings it creates in us.

Common in operas, there was a libretto translating the lyrics from Italian into English (but not Czech, for some reason).  We have never appreciated such things. If we can’t understand the plot from the movement and emotions of the performers, if the intensity of the song doesn’t touch us, then something is amiss.

To our delight, the libretto malfunctions, and we are allowed to exist in the moment of the performance without the interruptions of the narrative. 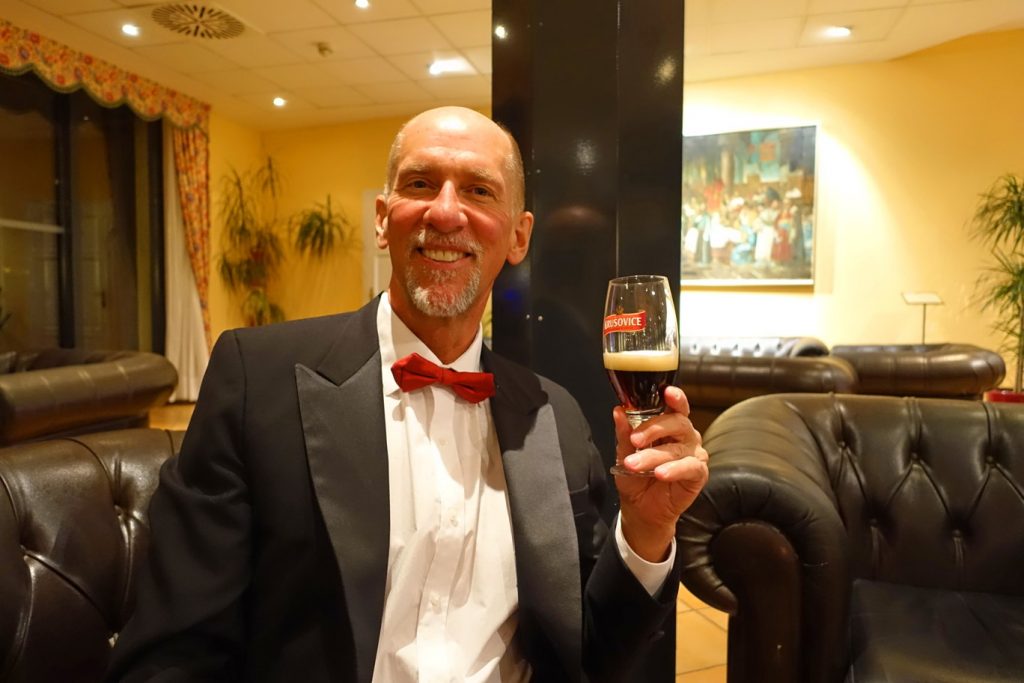 Enjoying a Czech beer after the performance.

We leave the theatre enthused and delighted, and recount our adventures over a glass of fine Czech pivo.

awa Travels Tip: Always look into local cultural events, and be sure to bring formal clothes when you travel.