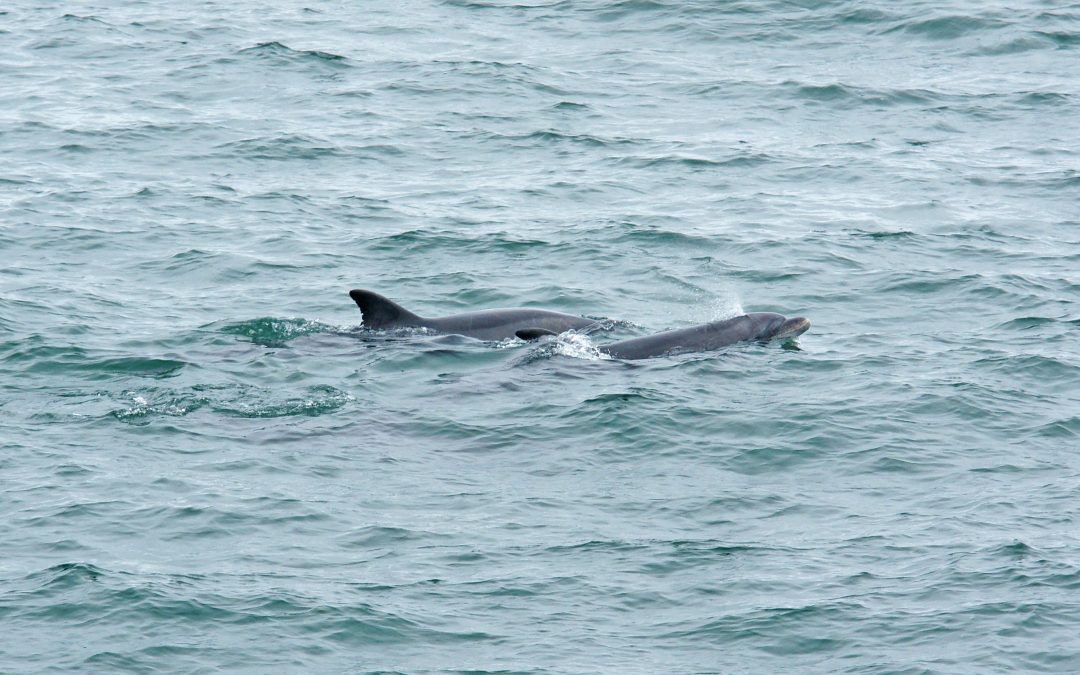 San Diego, California is a coastal community and provides many opportunities to see oceanic life.  Seaworld and the Birch Aquarium at Scripps (part of the Scripps Institution of Oceanography) offer a variety of experiences and adventures.

However, you don’t need to follow the crowds to see ocean life, nor do you need to rent scuba gear.  Just come to the beach and keep your eyes open.

Note that these critters are dolphins, not porpoises, and not dolphinfish, and not even fish.

The first and only rule of dolphin spotting is this: If you say, “Was that a dolphin?”, then it wasn’t.  Dolphins move very distinctively through the water.  When you see one, you’ll know.

A pair of Bottlenose dolphins swimming side by side.

When you see a dolphin, chances are good that it’s a Bottlenose dolphin, since they are the most common. 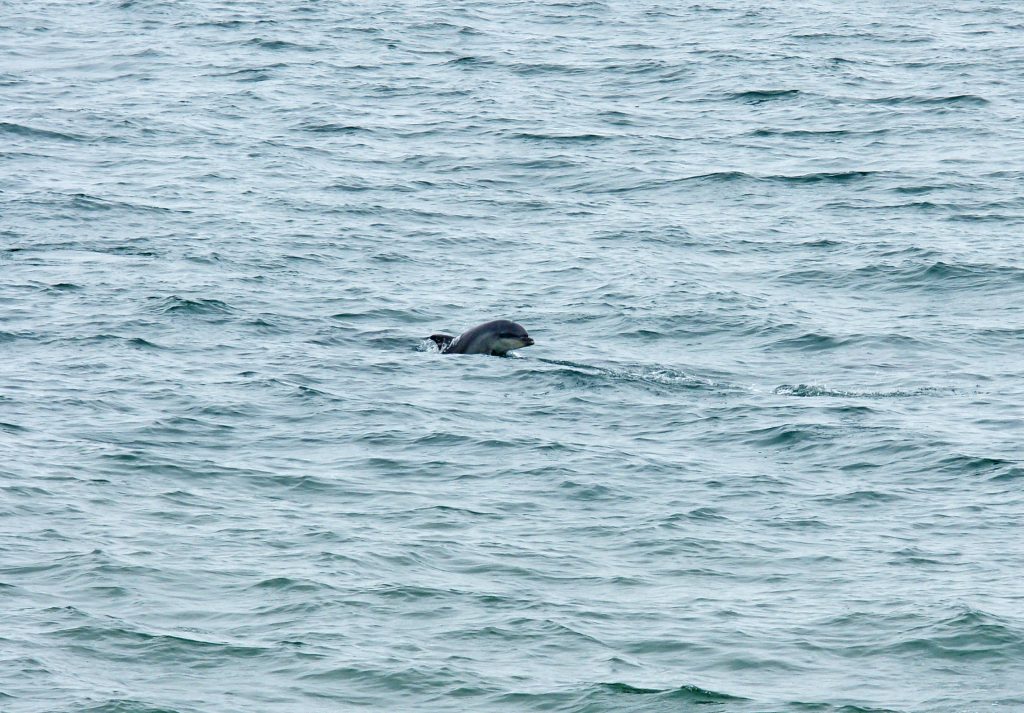 A Bottlenose dolphin breaching the surface.

Sometimes you see only the dorsal fin, but it is not uncommon for the mammal to lunge or breach. 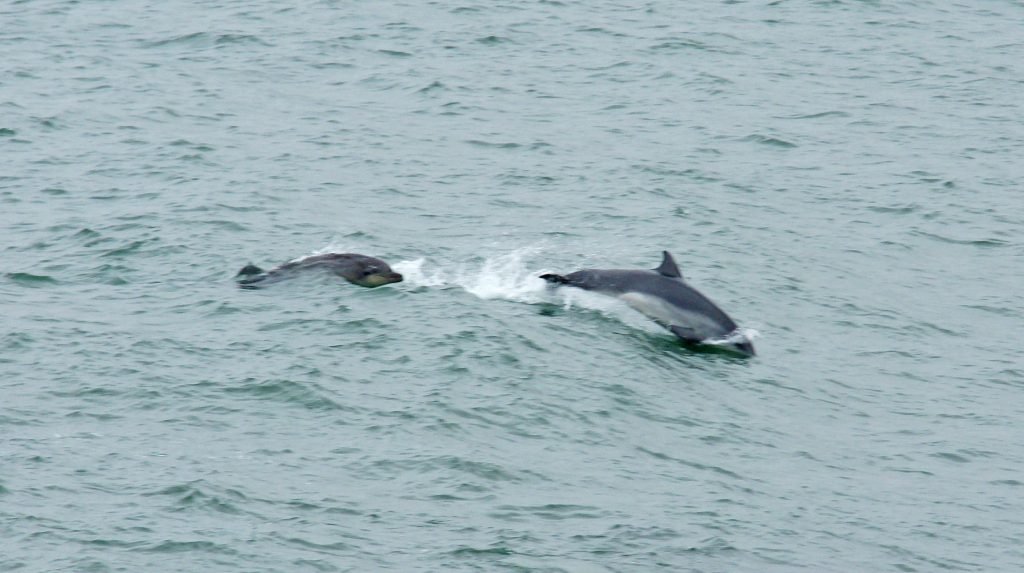 These appear to be Short-beaked common dolphins.

When the dolphins breach, you can sometimes discern the species. 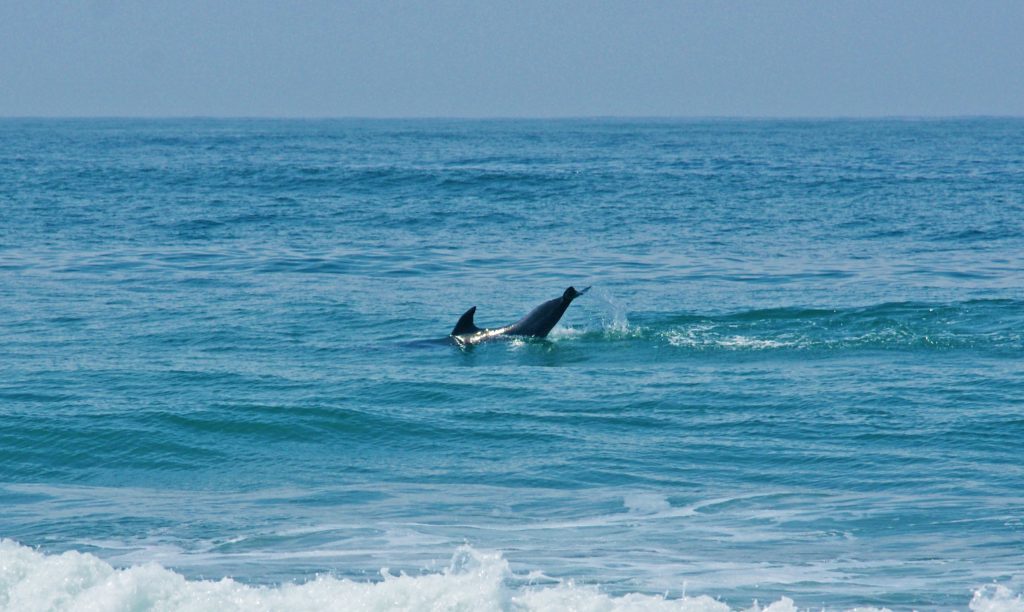 Dolphin will sometimes swim slowly and slap the water with their tail to herd fish.

If you see birds diving, they are catching food. It is typical to see dolphins in the same area. 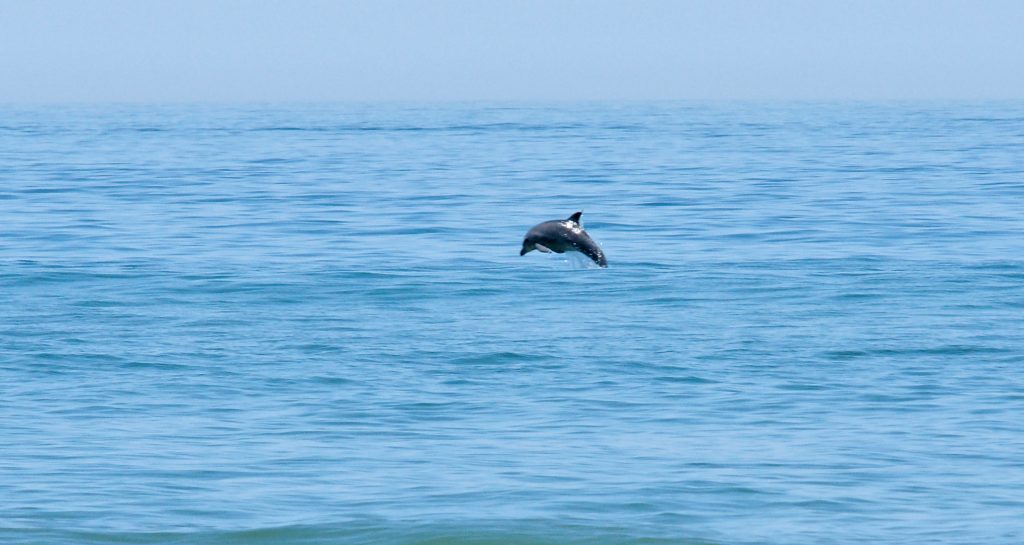 A dolphin flies through the air.

No one knows why dolphins breach.  There are hypotheses, such as shaking mites off their skin or communication.  My hypothesis is that they do it cuz it’s fun.  😎

The dorsal fin is made of soft cartilage and often dolphins will obtain notches and nicks in their fins.

A trained observer can recognize individual animals by the notches and nicks in their dorsal fin. 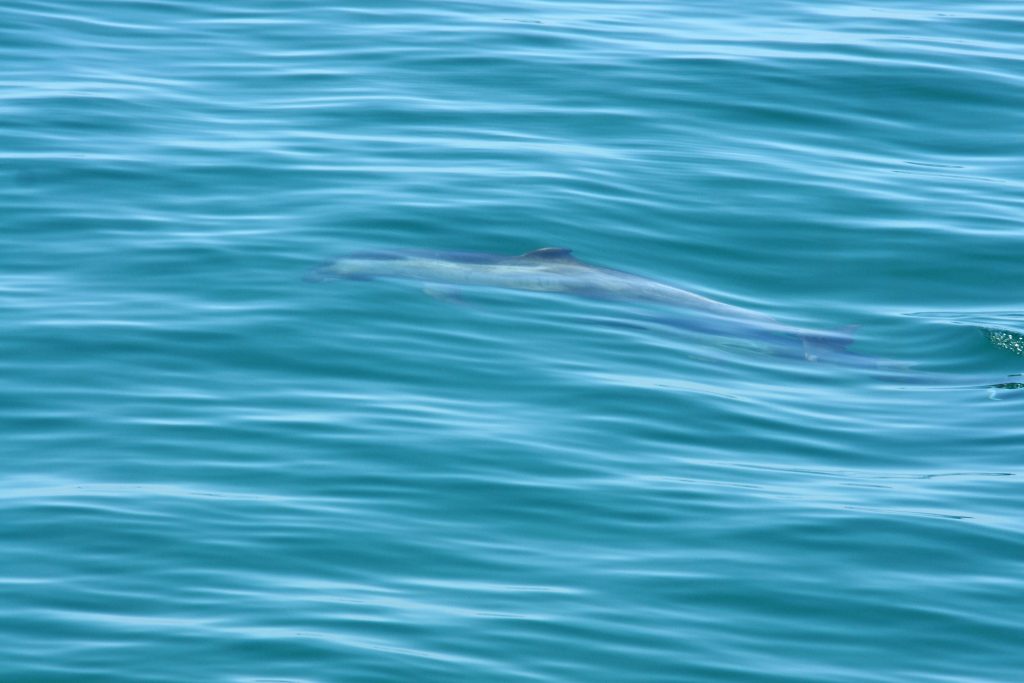 A dolphin glides silently through the water.

A famous author once wrote, “Never trust a species that grins all the time.  It’s up to something.”  This might be true. But dolphins are also one of the coolest animals you’ll see in the ocean. 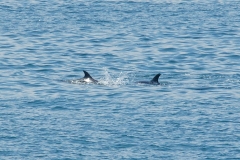 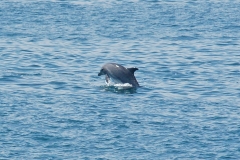 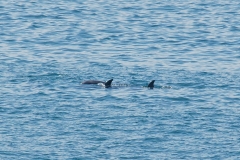 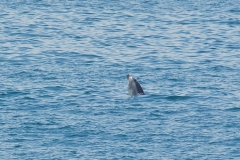 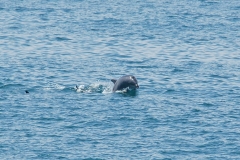 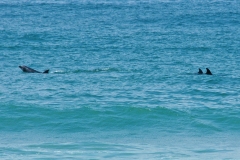 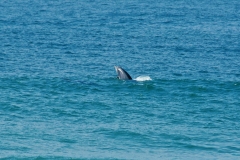 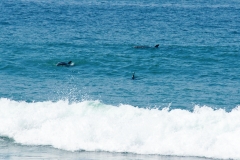 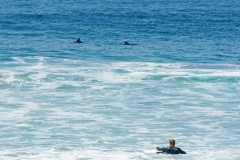 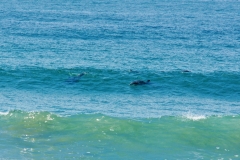 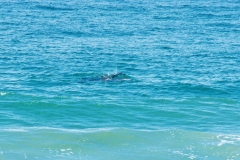 The waters off San Diego are home to the California sea lion (Zalophus californianus).

Note that these critters are sea lions, not seals, and not lions, and not even fish.  In fact, California sea lions do not even have lion-like manes.

The first and only rule of sea lion spotting is this: If you say, “Was that a dog way out there?”, then it is a sea lion. Their heads, just above the waves, look like a dog’s head.  When you see one, you’ll know. 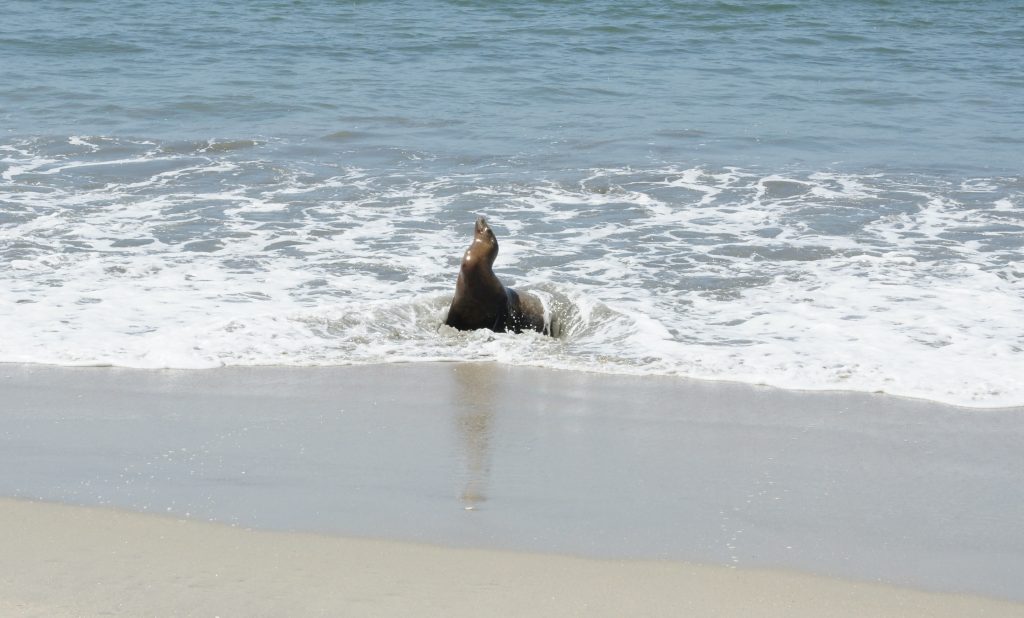 A California sea lion on the beach.

Sea lions sun themselves on rocks and other flat-ish places.  They can travel fairly easily on land; well, not as easily as a dog or a snake, but certainly better than a seal. 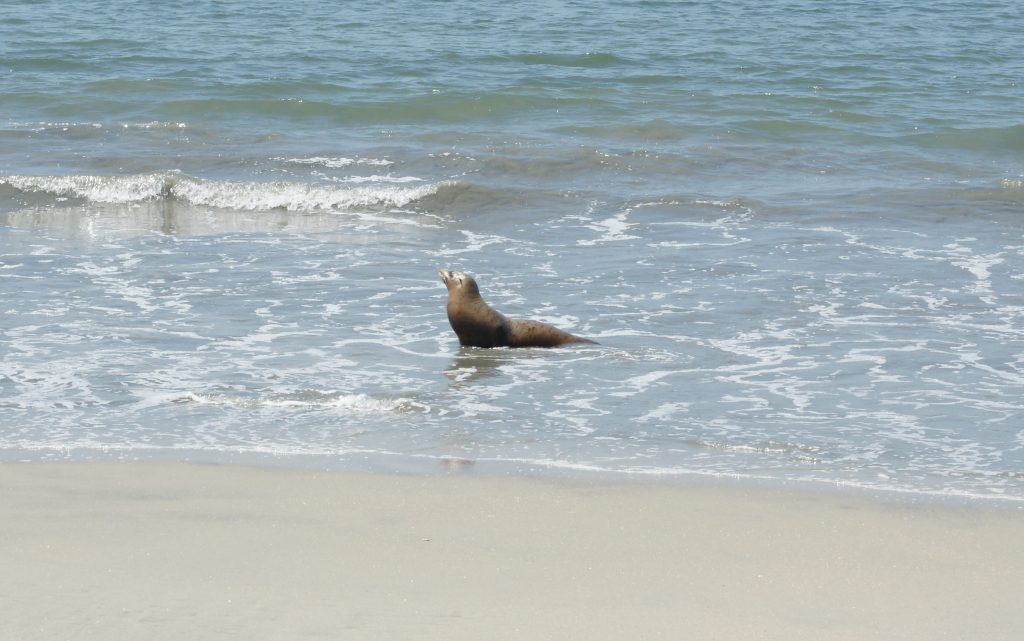 Like many 300 kg animals with large canine teeth, sea lions are unconcerned with humans.  The Marine Mammal Protection Act recommends staying at least 50 yards away. 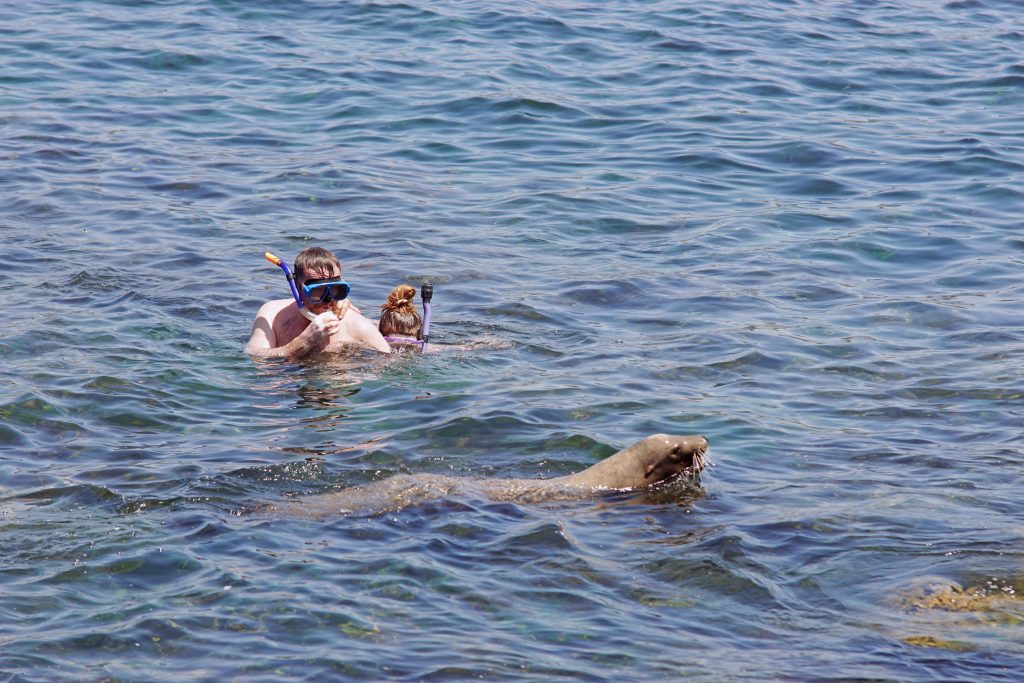 In La Jolla (pronounced “la hoya”), California, there is a small bay called La Jolla Cove (pronounced “la hoya cove”) where swimming and snorkeling are allowed and where sea lions swim, feed, and rest.  If you enter the water — even if you mind your own business — it is not unusual for a sea lion to come uncomfortably close to you. 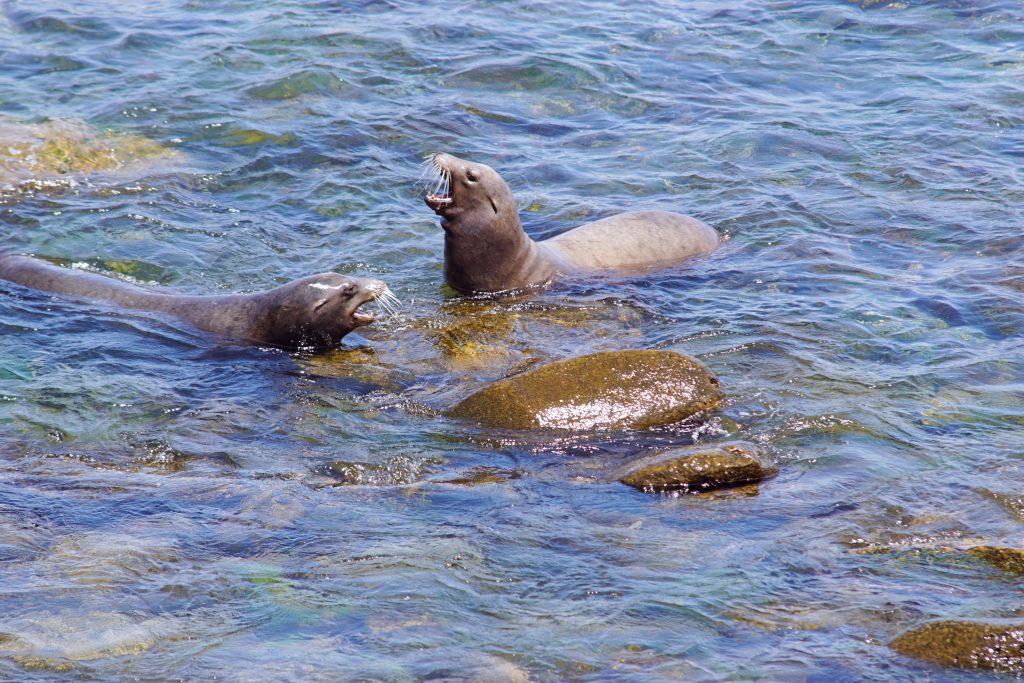 The cone-shaped teeth are designed for grasping and tearing flesh.

Once, when circuses displayed animals for our amusement, sea lions were trained to stand on a pedestal and balance a ball on their snouts.  Okay, that’s kinda cool, but these creatures are far more graceful and fascinating than that. 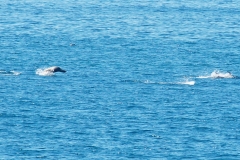 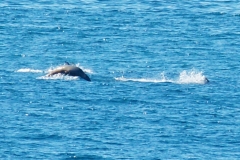 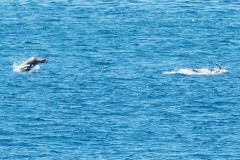 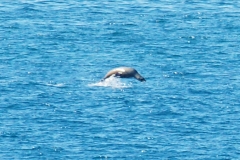 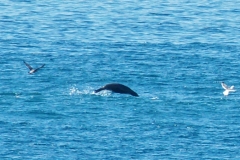 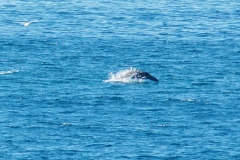 awa Travels Tip: Exciting wildlife abounds off our shores.  Sit down on the beach, look out over the waters, and see what there is to see.